A friend’s breast cancer experience and unmet bra needs sent Silke Hofmann on a design journey striving for inclusion and harmony. In her practice-based Ph.D. at the Royal College of Art, Hofmann works alongside affected women towards understanding and collaboratively manifesting the spectrum of bra needs. Within Re-FREAM, Hofmann developed a speculative, modular garment that questions current bra construction and proposes an alternative breast support structure, reaching beyond the concept of underwear. The creation and manufacture of clothing becomes an empowering and re-energizing experience of the self, supportive and devoid of judgement.

Hofmann uses collaborative processes to re-center the garment wearers, their emotional needs and their bodily experience within the manufacturing process. Producing the prototype became a curative tool for wellbeing. By integrating and encouraging self-expression, manufacturing becomes a way of creating physical and emotional comfort.

Together with her project partners, Hofmann developed both analog and digital prototypes.  With Case Studies and Wint Design Lab, she developed a modular bra alternative through two additive manufacturing processes. With Case Studies, she engineered a 3D knitted base garment, which wearers customize according to individual needs and specific bodily situations. Together with Wint Design Lab, Hofmann computationally conceptualized novel breast support for individual body topologies based on 3D body scans. Hofmann applied fragmented support structures to the knitted garment with heat transfer processes.

Through the Linz Hub, Hofmann met Viktoria Prantauer, who works towards democratizing breast cancer data through AI. Prantauer became the project’s participant and the co-designer of two custom bra alternative versions according to her own clothing needs after breast cancer.

Hofmann’s research integrates and welcomes the garment wearer in the circle of experts. As she points out, “they have the knowledge of how a garment needs to feel and perform”. But the project extends far beyond the traditional functionality of clothing. By designing a highly empathetic exchange with the wearer, the making process addresses more than only aesthetic and ergonomic needs: it furthers emotional wellbeing. A cause which, as Hofmann adds, defines her approach:“my job is to hold their emotions”. The goal is products that are not just soft in terms of tactile comfort, but also to cushion a moment of transition. They adorn and validate body shapes without judgement. Their snug fit empowers their co-creators to transcend the protective slouching often experienced after operations, stimulating a confident bodily stance. Manufacture becomes a collaborative step towards recalibrating movement, energy, identity – and interactions with others.

Through an interactive co-creation process, the modular bra alternative was customized to the body shape of project participant Viktoria Prantauer, who co-designed two additional garment variations according to her taste and needs. Prantauer has two different-sized breasts since her breast cancer surgery, so bra alternative cups were made to support each breast size individually. Viktoria’s physical and emotional responses during the garment fittings were recorded and allowed for an adjusted final garment, which she confirmed as especially supportive to her needs.

Both the functional prototype and the communication surrounding it re-center the needs of females affected by breast cancer. A thoughtfully orchestrated photoshoot for the final product continued to develop the concept of care, including melodic soundscapes meant to further wellbeing. Hofmann’s innovative approach was also publicized through German Vogue, a key fashion publication, raising awareness amongst both a wide audience and key industry players. The creation of a digital double allows further communication possibilities in the spectrum of clothing design for body diversity. The final digital 10 design shapes respond to a variety of different needs and aesthetic preferences drawn from international research. Two of them are tailored to the utmost detail to Prantauer’s needs, including an uplifting structure of anchor points. The digital renderings illustrate the customization possibilities on a mass scale.

Hofmann uses customized 3D knitting to not only create a product, but to re-humanize the production process. Her modular bra alternative questions both standardized beauty norms – especially the idealization of symmetry – and standardized production methods. By designing a co-creation process through which new manufacturing technologies amplify the voice and needs of affected females, manufacture becomes care. This research opens doors to new possibilities of mass customized production as a way of understanding each other. Hofmann’s process centers on what clothing does. It showcases the potential of fashion and its creation and production process to not only recalibrate the corporeal experience of clothing, but to transform people and society. Customization through additive manufacturing becomes a tool for listening, healing, empowerment, and compassion.

While the research addresses the unfulfilled clothing needs of women living with different sized breasts, one breast, or flat after mastectomy, it can lead to customizing garments far beyond the case study. For example, Hofmann points to a significant population segment that has a genetic predisposition for asymmetrical breasts, which has not been catered to. Most importantly, the proof of concept Hofmann developed through her Re-FREAM collaboration leads the way for empowering wearers as experts and stakeholders in the design process. This is a goal she would like to develop further and encourage. Welcoming garment wearers into the design and manufacturing process can radically alter society’s perception of breast cancer and systems of care. 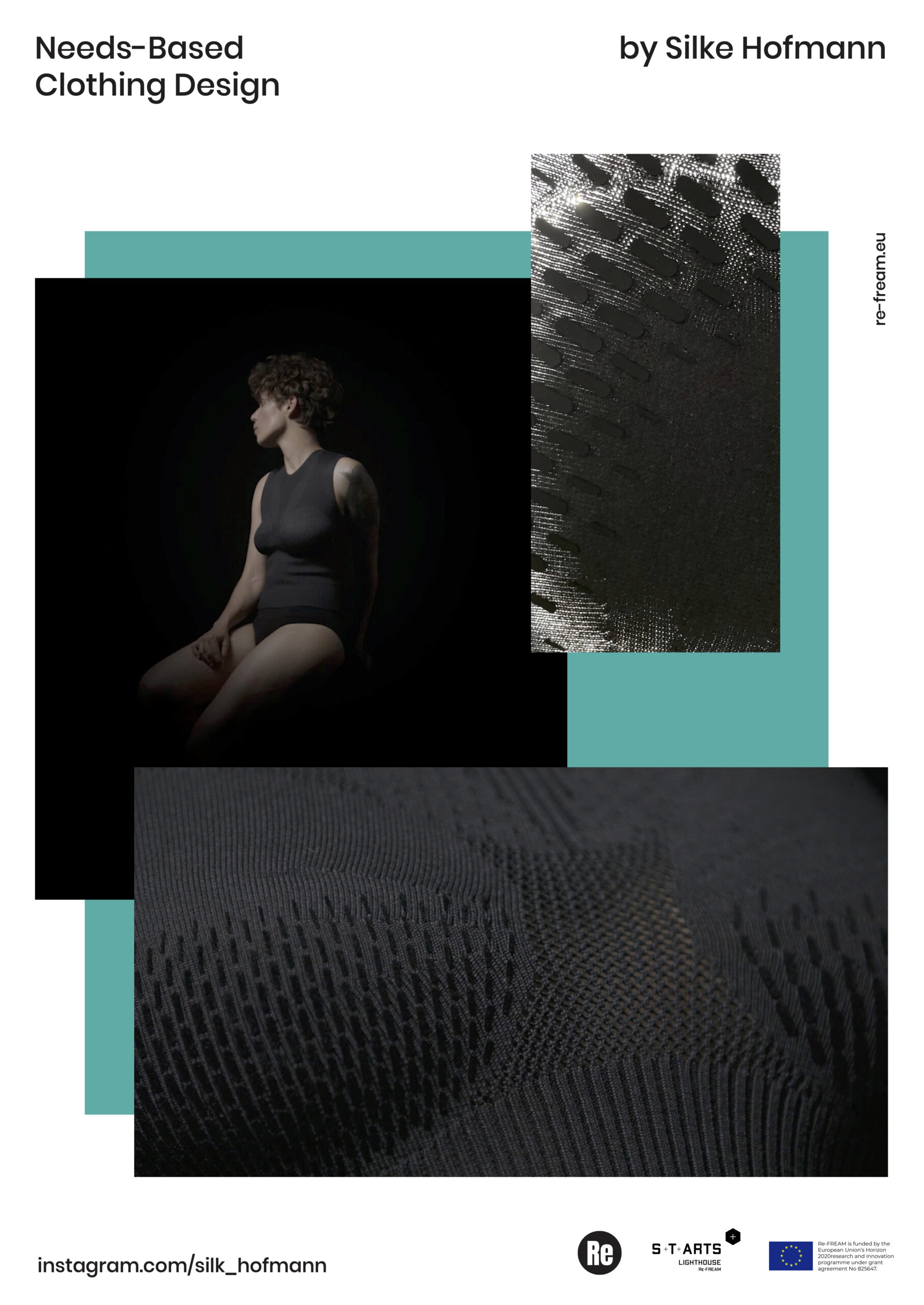 Silke Hofmann is rethinking the conventional post-mastectomy bra on a structural level to co-create a wearer centric, modular and customisable bra alternative supporting women’s individual needs after breast cancer. In her design practice, she is interested in the wearer-garment relationship and in conceptualising garment development processes that advocate consumer participation and co-creation. She believes collaborative clothing developments produce more inclusive and need-specific designs that bear the potential to fill neglected gaps in underserved individuals clothing needs. Her design research is situated in the female health spectrum and focuses on aesthetic and ergonomic bra needs of females affected by breast cancer after mastectomy.

Together with her project partners Case Studies and Wint Design Lab, Hofmann developed the analog modular bra alternative prototype through two additive manufacturing processes. The bra alternative is a 3D knit engineered, modular and mass-customisable garment that supports the wearer’s specific bodily situation. This soft support construction is achieved through the specificity of the tessellated knit patterns and the parametric breast support structure that sits on top of the knitted garment. The support of individual body topologies is based on 3D body scans. Agnes Psikuta from Empa contributed textile digitizing processes, 3D-dispensing trials were carried out by Profactor, digital characters were designed by Nedim Šećeragić. CLO 3D digital prototyping and compositing was realized by Sander Hofstee for the Fashion & Technology department at UFG Linz.

Fragmented support structures were applied by Hofmann to the knitted garment with heat transfer processes. Südwolle Group sponsored Hofmann’s project with a natural and innovative yarn composition that accommodates specific skin sensitivities and thermal needs. An extremely fine 15.5 microns merino wool (the area in which cashmere is classified) and silk, it combines the warming effects of the wool and the cooling feeling and smooth surface of silk, resulting in a highly pleasant haptic experience. 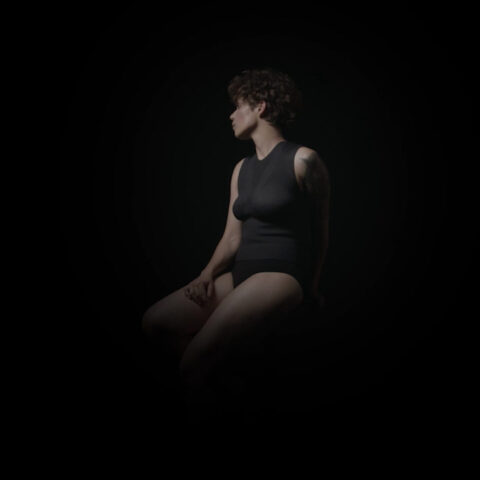 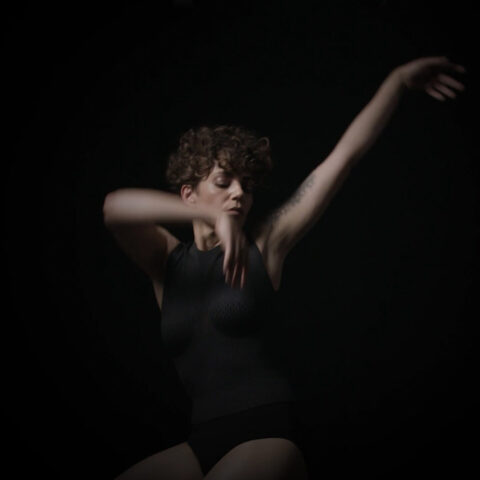 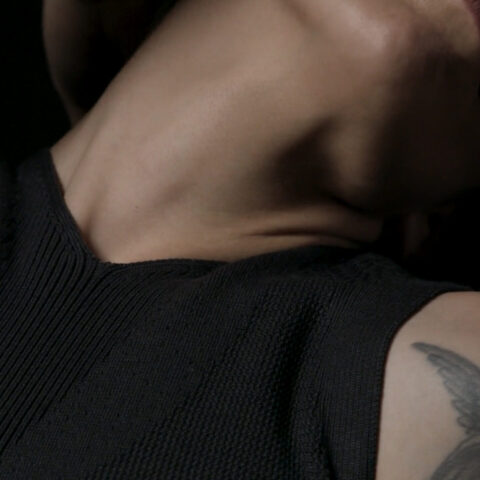 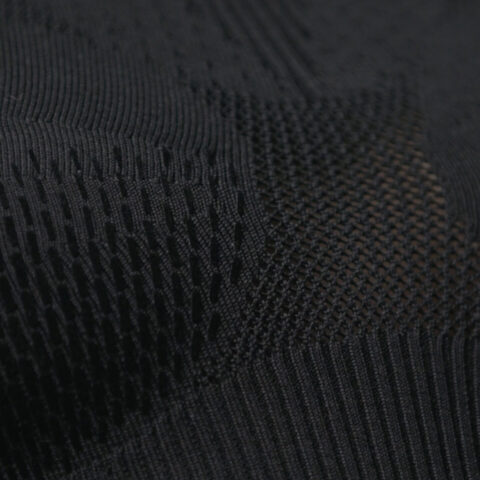 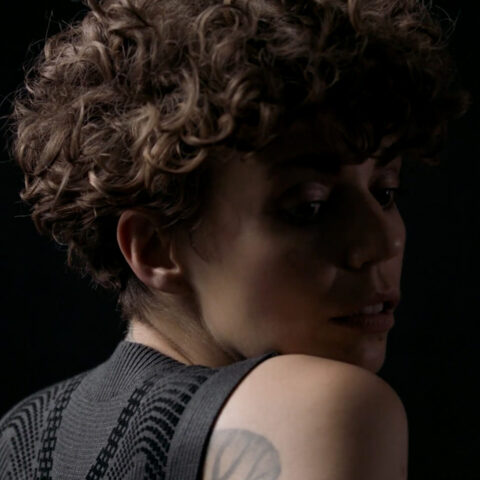 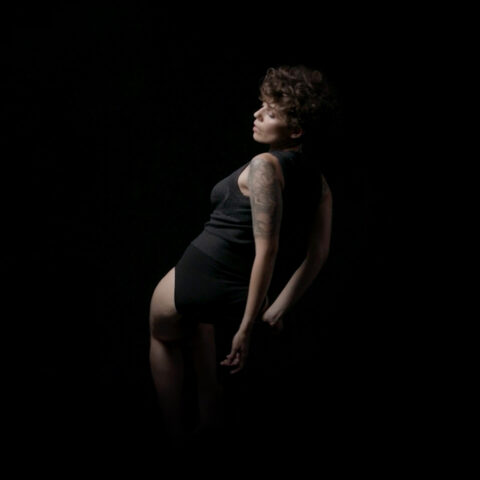 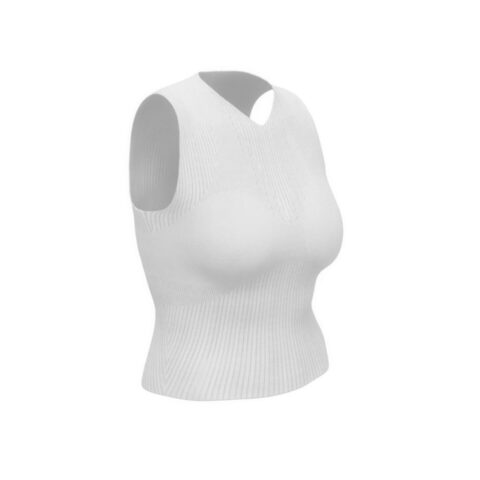 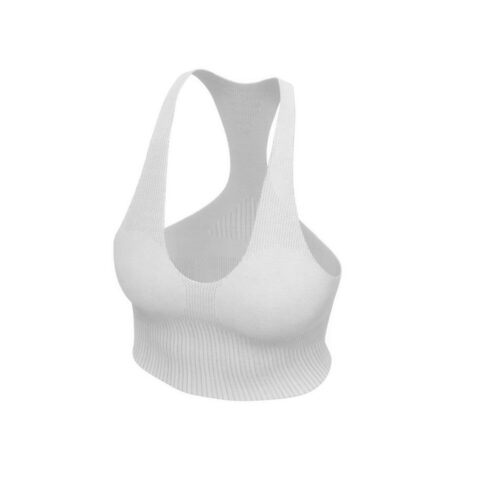 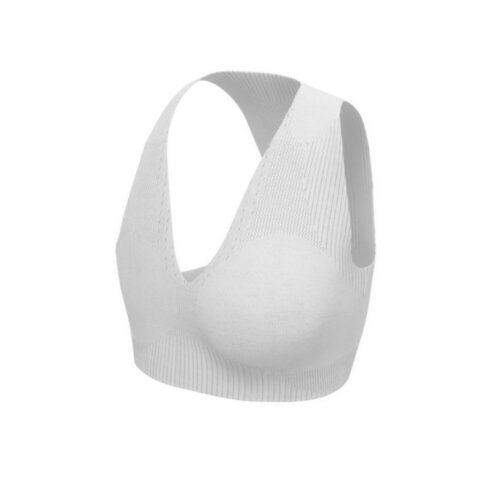 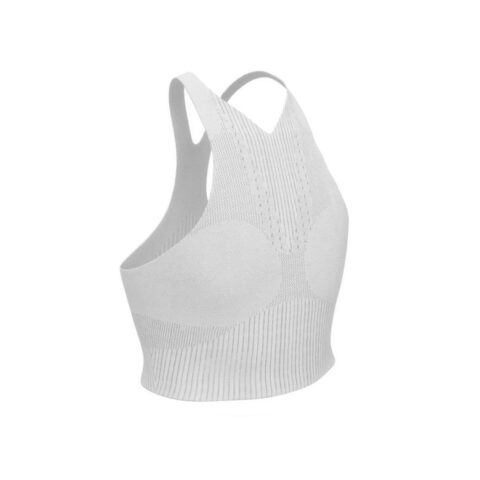 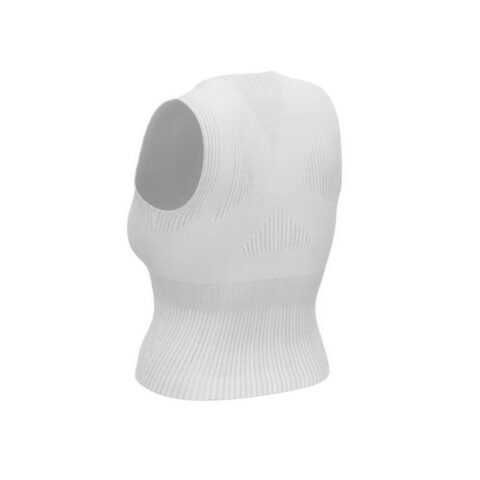 Silke Hofmann designs and researches clothing that recalibrates the body and emotions. Her career as a women’s wear designer and fashion illustrator led her from New York City and Paris to Berlin, with clients ranging from Chloé to DKNY, from Tracy Reese to Michalsky. Her clothing designs have been featured in a variety of publications including Vogue Germany, Paris Vogue, I-D magazine, Wallpaper magazine, and arte.tv.

Central to her work are the aesthetic and ergonomic bra needs of females affected by breast cancer. Through participatory design sessions, Silke works alongside them to investigate and address their clothing needs. These explorations of wearer-garment relationships, which she has developed into speculative clothing design processes that welcome the garment wearer as a stakeholder and expert to the design team.

Her research lies at the threshold between the garment and the wearer, between bodily experience and emotional impact. She has received funding awards from the European Social Fund through the Tech Accelerator DesignFarm Berlin and the Horizon Eurpoe’s ReFREAM grant. She has been a visiting researcher at DesignFarm, as well as a JASSO-funded researcher at the KYOTO Design Lab of the Kyoto Institute of Technology. 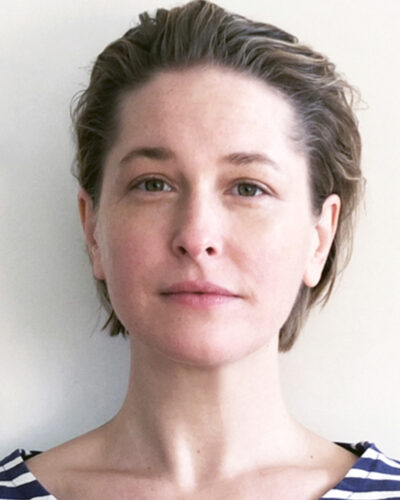 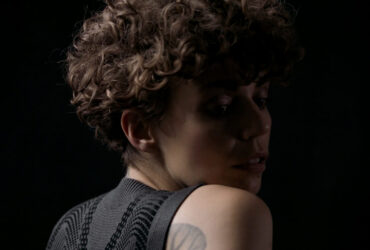 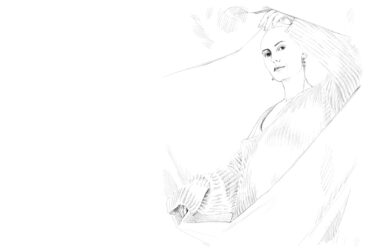 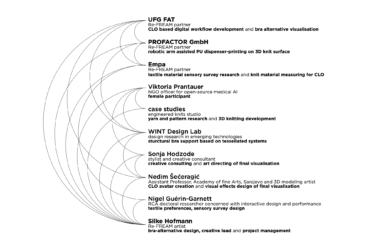 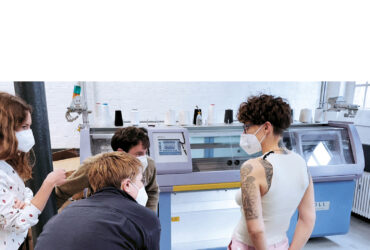 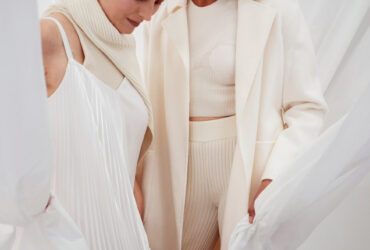