Making is mesmerizing. Yokai studio’s robotic fashion manufacturing melds design with automation, upcycling – and spectacle. The goal of the founders Michael Wieser and Viktor Weichselbaumer is to build a system for both localized and customized clothing production. Working with robotic arms and software, they transform traditional flat garment production into a three-dimensional and kinetic process. Their unique approach also allows us to watch machines play.

The focus of the team’s Re-FREAM project is the use of 3D printing for garment assembly. Using the Yokai expertise in robotic printing for customizing garments, could robots enable new automated seaming solutions? Initial tests centered on thermal 3D bonding techniques to replace traditional seams, then on form making with filament printing.  A large variety of samples of seams were produced through material testing and machine calibration. Wieser explains: “It was completely unexplored territory. Now we know which materials we can and can not work with!”. The process revealed that mixed and artificial fibers react strongly to thermal seaming, whereas natural and smooth fibers such as silk do not. The main factor determining the strength of the bond however is the precision of the seam placement and its relation to the surrounding surface.  EMPA in St. Gallen tested all samples created by the technology partners Profactor and Haratech, as well as the DIY solution of 3D formlock seams created at the Yokai studio.

The main outcome was a seam solution which achieves the sturdy military standard for uniforms – a strength of 1650 Newton, confirmed by the EMPA testing lab. “Knowing that our products are truly functional for everyday use was one of the most encouraging outcomes of Re-FREAM!”, says Wieser.  Another outcome was the collection of manufacturing data. How close must the tip of the 3D printer be to the textile? How much material is necessary to the left and right of the seam ? What are the parameters that needed for these new production processes? Taking these tests further with sensor technologies could change production on a large scale.

Through the Re-FREAM exchanges, the team has a better understanding of the large-scale funding that would be required to develop the machine to mass-production industry standards. But even on the DIY scale, new seaming techniques which replace traditional sowing and allow for 3D customizations can transform manufacturing – and creative outputs. Replacing static sowing machines with kinetic robotic processes enables three-dimensional rather than flat joinery. The possibility of transparent seams also opens doors to further design innovations – including for the domain of repair.

Reliable decentralized manufacturing assembly can reduce the outsourcing of garment and accessory assembly, encouraging urban regeneration. It reduces shipping costs and the carbon footprint that transportation entails. The Re-FREAM project also generated new reflections on more playful human-machine interactions in manufacturing.  Could standardized repetitive interactions with sowing machines be replaced by more intuitive collaborations with robots? Could manufacturing mean tending to machines, feeding them code, preparing and training them to perform? Beyond the re-localization of production, the ReFREAM project also led to a reflection on how new ways of manufacturing can allow for new kinds of human-machine interactions.

Currently, the Yokai team is focused on building their brand, developing their design language, and offering a range of products with their machines. The natural next step from printing are other functional work-processes, such as (multidimensional) pattern-cutting. Longterm and with additional funding, the goal is the establishment of micro-factories. The studio aims to generate large scale further funding with the help of their current partners, the Creative Robotics Lab of the Kunstuniversität Linz, and is in discussion with Rickard Lindqvist of [a]industri in Sweden.

Though performative automation may not be the Yokai team’s end goal, the appeal of their production process has proven to be a viable and unusual new business model. One example is the studio’s collaboration for deadstock upcycling through robotic customization with the fair sportswear label Das Merch. The made-to order customized Roboprint Tshirts each featured its own unique generative design, and customers had the option to attend or watch the production  performance Their robotic manufacturing arms have also generated income for the studio through events at malls in the Middle East and company events.

When a robotic arm swivels and customizes garments with acrobatic dexterity, spectators enjoy the gestures. Experiencing robotics in motion creates a sense of suspense, even drama and resolution – similar to the ways we enjoy the flourish of a gesture by a skilled artisan. It is a new approach to production, which the Yokai team hopes can allow for more playful human-machine manufacturing collaborations.

The co-creation team around Yokai Studios, consistent of the Re-FREAM technology partners Haratech, Profactor and EMPA, developed a prototype for a one-stop-shop robot based manufacturing system for fashion.

The projects acts on the interface between virtuell design methods with 3D technology and new production methods and brings up the potential for urban manufacturing/local production and customized fashion.

Yokai Studios worked within the Additive Manufacturing Hub of Re-FREAM and focused on urban manufacturing. Their manufacturing tech partners were Profactor and Haratech. EMPA in St. Gallen extensively tested samples, while the Kunstuniversität Linz facilitated networking and development.

To investigate seaming possibilities, Yokai chose 10 materials to test. These included natural and artificial fibres in both woven as well as knitted textiles. Haratech tested joining fabrics by FFF printing on the textiles. Fused filament fabrication (FFF), also known as fused deposition modelling or filament freeform fabrication, is a 3D printing process that uses a continuous filament of a thermoplastic.

In parallel, Profactor tested PU (polyurethane) dispensing in order to join fabrics. Polyurethane is a common polymer composed of organic units joined by urethane links. At the Yokai Studio, the team put their robotic arm and a Trotec laser cutter in motion to produce a 3D formlock seam.

They also developed pieces using transparent seams, adding the new design element of light travelling through the seams. All three teams grounded their research in the detailed instructions by Empa to allow for testing at their facility in Switzerland.

The results of the Zwick test and Tension test carried out by their Federal Swiss Laboratories for material testing showed similarly successful results for the 3D formlock seams as for the FFF approach by Haratech.

Julia Kastner, Profactor, about the project

“Michael Wieser and Viktor Weichselbaumer are two extraordinary and nice guys, with highly innovative ideas for changing how garments are produced. They are young and flexible in the way they think – and so is their robotic solution.

Their concept of bringing production back to Europe by digitalizing the process and allow for local production is very exciting. Together we investigated the robotic “printing of seams”, which showed us new possibilities to use our technologies for printing on freeform and printing Poly urethane (currently mainly used to printed electronics) in a new way for garment production.

It was not only about developing something for their project, but also about learning from Michael and Viktor, together with the other project partners Agnes from EMPA and Guillaume from Haratech.

After deciding on the best sewing process, the focus turned to bringing the technology to the robot. For example, robotic movement needs to be adjusted according to how close the tip of the 3D printer is to the textile. By measuring the distance to the textile by laser, we optimized a Profactor-made program to adjust the curved arranged textile for the robot-printing of the seams.” 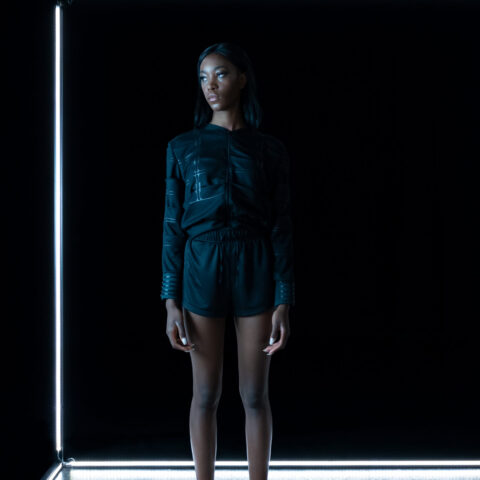 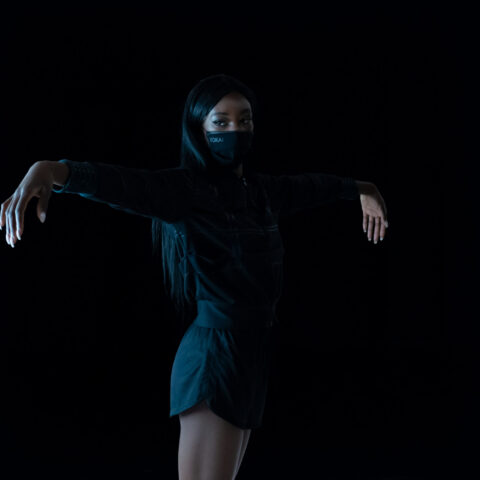 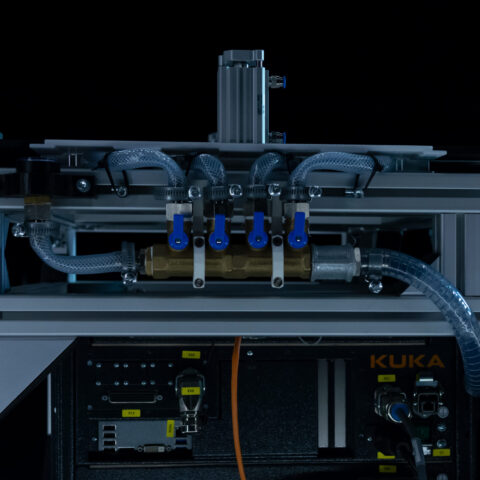 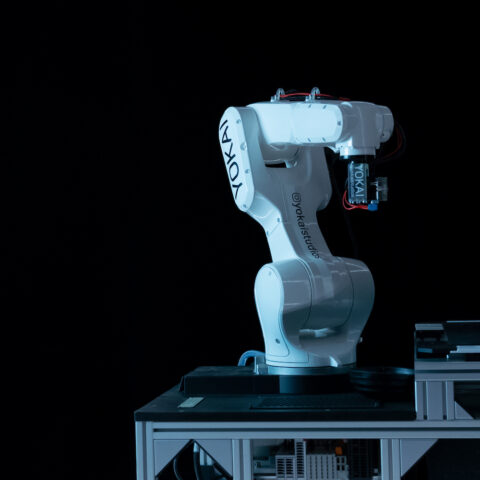 Yokai Studios started as a research project with the aim of bringing back clothing production to Europe. This is made possible through the creation of a new digital based process for local customization and garment production by developing completely new methods for fashion design.

As history shows, every new technical innovation has led to new aesthetics and silhouettes. As designers, the “Yokais” shape these new silhouettes according to their vision, to create a new design language and they want to invite other designers to do that with them. Their long term goal is to build a robot based automated manufacturing system, which enables the local production of customized clothes.

Yokai Studios believe that design is a combination of functionality and innovative forward-thinking methods, that can reveal new looks of fashion products but at the same time it should face the issues that we are challenging in the 21st century.

This way of thinking gives us the opportunity to confront problems from different angles and is the result of the artistic and technical background of the Yokai Studios team members and co-founders Michael and Viktor. The main goal of the “Yokais” is to combine new technology with well-known techniques for the creation of designs in new and exciting ways. 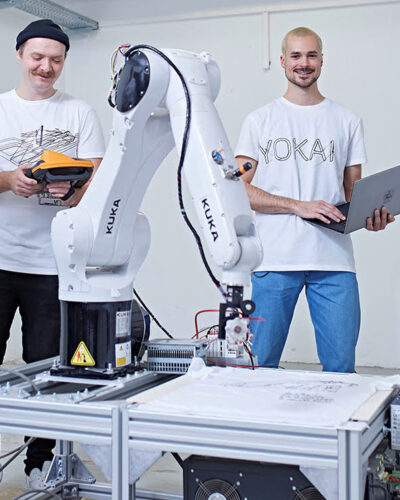 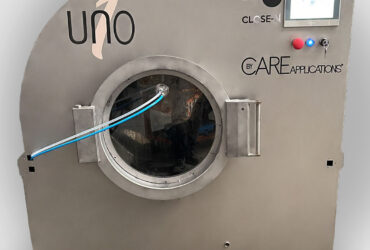 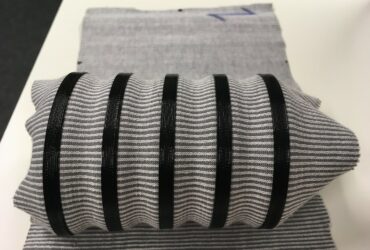 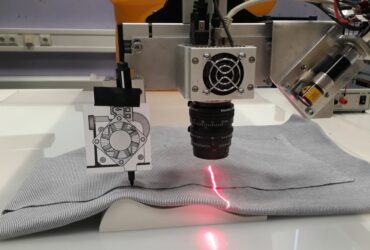 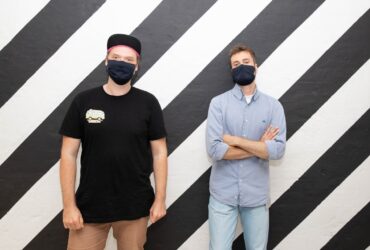 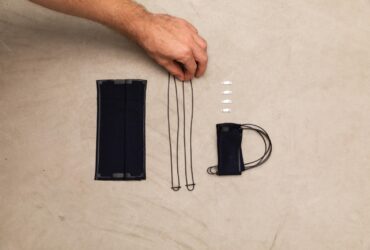 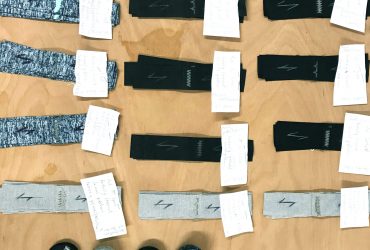 Keep It Together: Testing and Tryout for Seaming Solution – Yokai Studios