The project Syntropia develops a shoe based on biomaterials which can grow on and be harvested from the same regenerative polycultural field.

To see more about the previous steps of the project see our blog posts:
Syntropia, Researching Syntropia and Thinking Footwear through a Regenerative Polyculture.

Having tested, experimented and developed with focus on the materials, we moved onto the shoe. What do the filaments we developed mean if they are applied to the geometry of a shoe? How can we generate an entire frame to create full prototypes with? How do we deal with the rubber composites in the context of an actual outsole and what could be future structures we could build them on?

Continuous Path creation and Continuous Filament Printing
Having explored various ideas for automatically generating the printing path for the continuous filament, we for now settled on manually offsetting the print lines on the shell of the last and creating the path. For the purpose of testing, we again moved step by step from a one layered welt (the part of the frame being stitched to the outsole) to a two- layered welt with various orientations of the second layer. We then moved to the heel part first without and then including the welt. 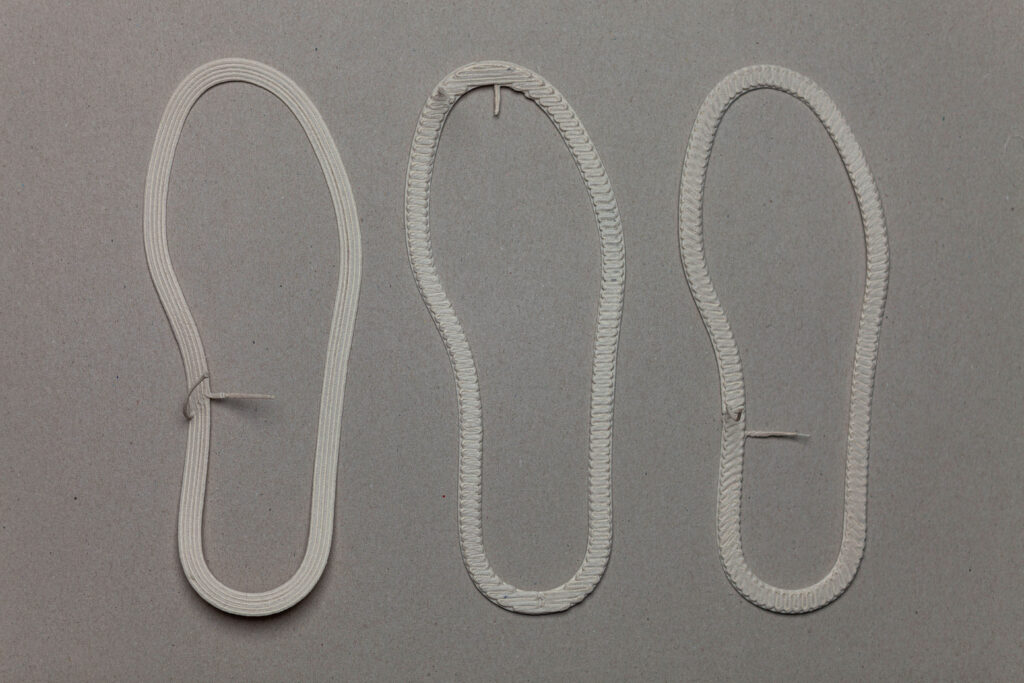 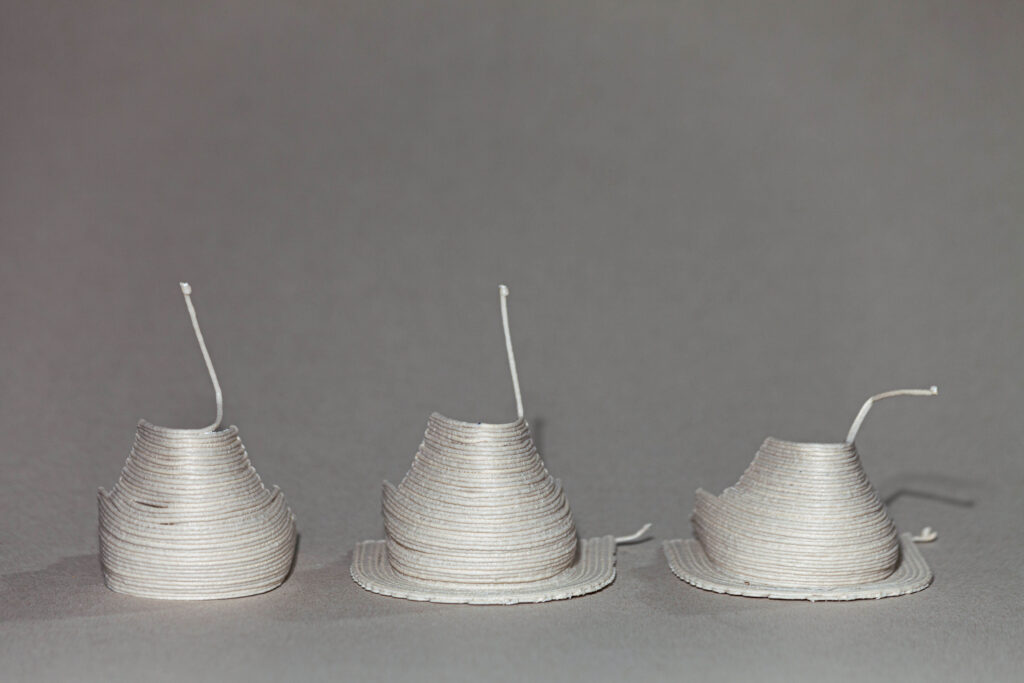 Printing the heel with a continuous path (Image: Elisabeth Handl)

Development of printing strategy for unfilled filament
Next to developing the continuous path and printing with the newly developed filaments, we also worked on printing the frame with unfilled material. Here we followed two strategies: splitting the printing capacities between our technology partner Haratech and our own humble printing capacities. 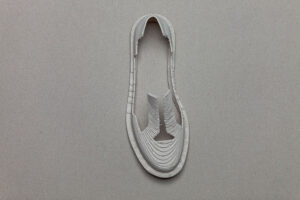 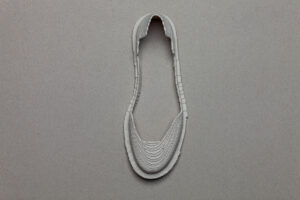 Mold Making and Sole Strategies
Continuing from the rubber compounds we developed, we defined three sole concepts for the outsoles. We worked with flat, even outsoles in order to take into account their repairability. Considering that we are developing a blueprint and materials for the outsole that are not commonly available, we wanted to take into account that the outsoles would be repairable with commonly available sheet materials used by cobblers. 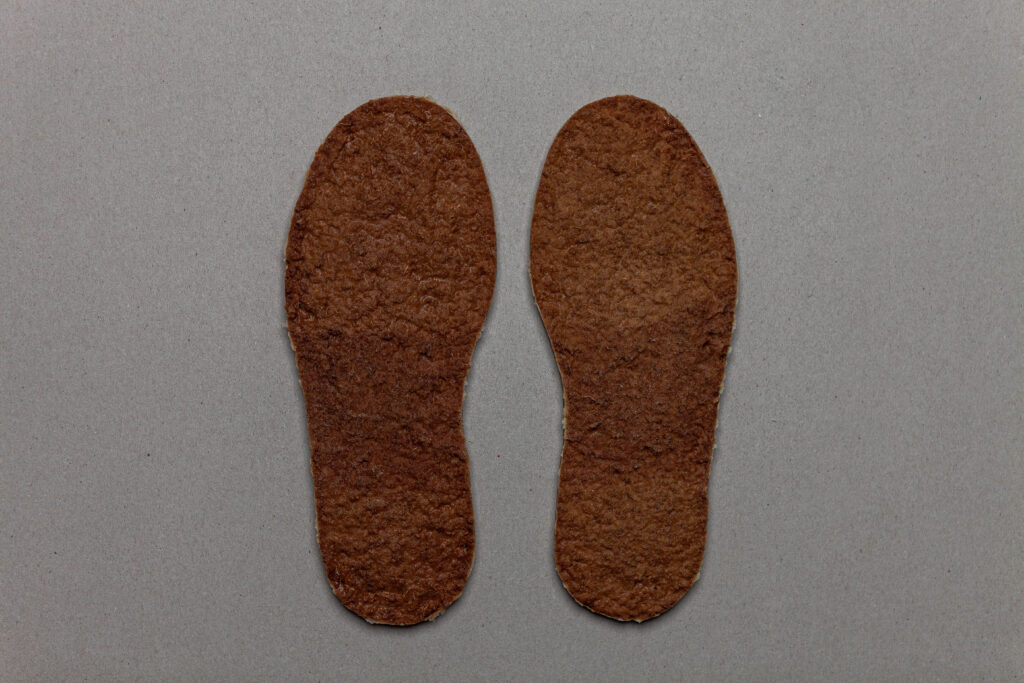 A “cup” sole in traditional shoe making is a molded sole where the shoe sits within the outsole and is stitched or glued on the side. We developed a concept that could be filled like a cup with fibres or felts to make the outsole thicker but still light. 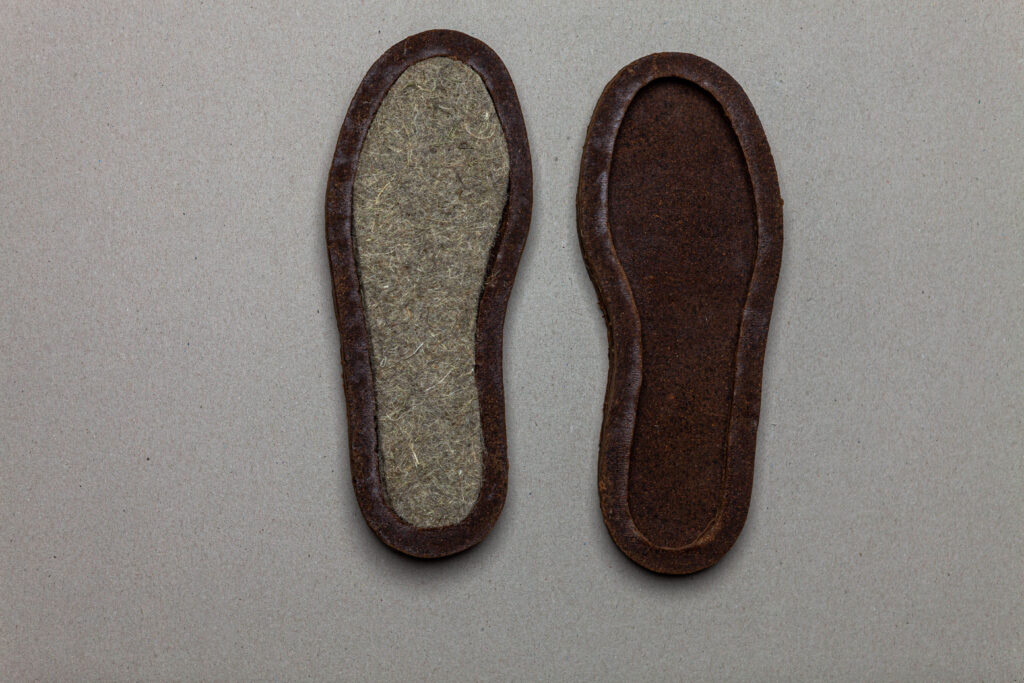 A front and a heel piece, which can be used for reparations or as the exchangeable bottom layer on an otherwise engineered outsole. 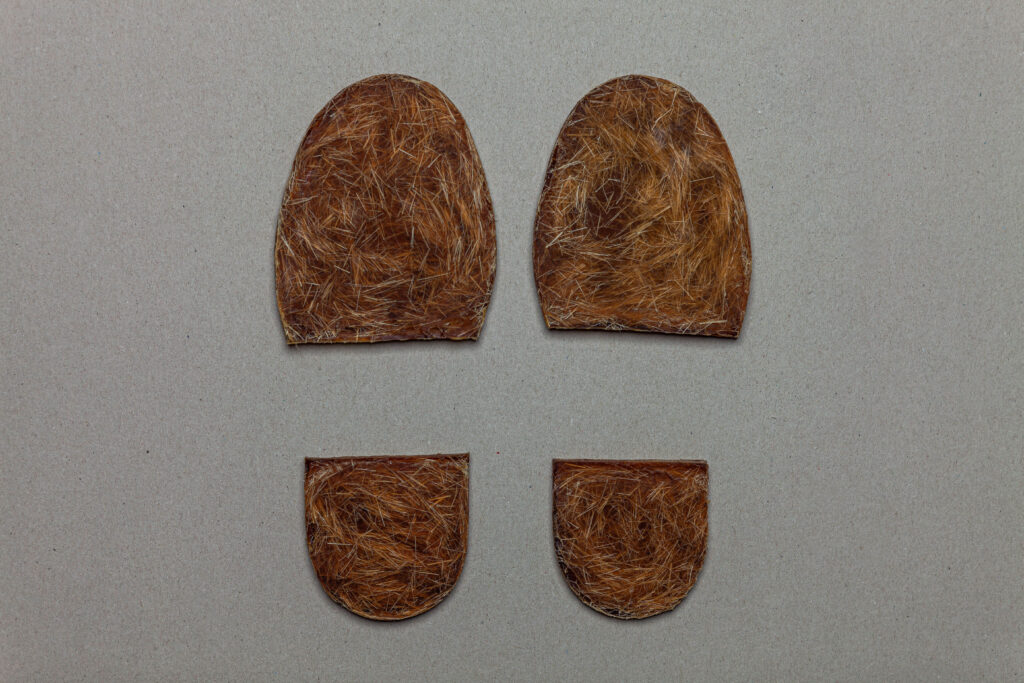 The shoes
The combinations of findings from the polyculture, materials, and footwear production research resulted in four variations of the Syntropia shoe.

The shoe can be seen as a flexible framework, where each component can be produced with different levels of technological complexity according to the infrastructure locally available. The upper can be hand crafted as much as industrially manufactured. The outsole can be 3d printed on demand, cut from standardised rubber sheets or produced in higher numbers by mold casting. This approach proposes a system which uses appropriate technologies in relation to the potential local context of production. This flexibility can be found also in the materials used to manufacture the shoes. Working with materials derived from a biodiverse agro ecological system challenges us to implement the same richness in biodiversity of materials in the design of the shoe. Following seasonality through the years, we aim not to rely on one resource alone. We designed a product where each component can be manufactured using a variety of different resources respecting the unpredictability of natural cycles.
Four prototypes which represent the quest of allowing flexibility in the materials used and in the  production systems employed. 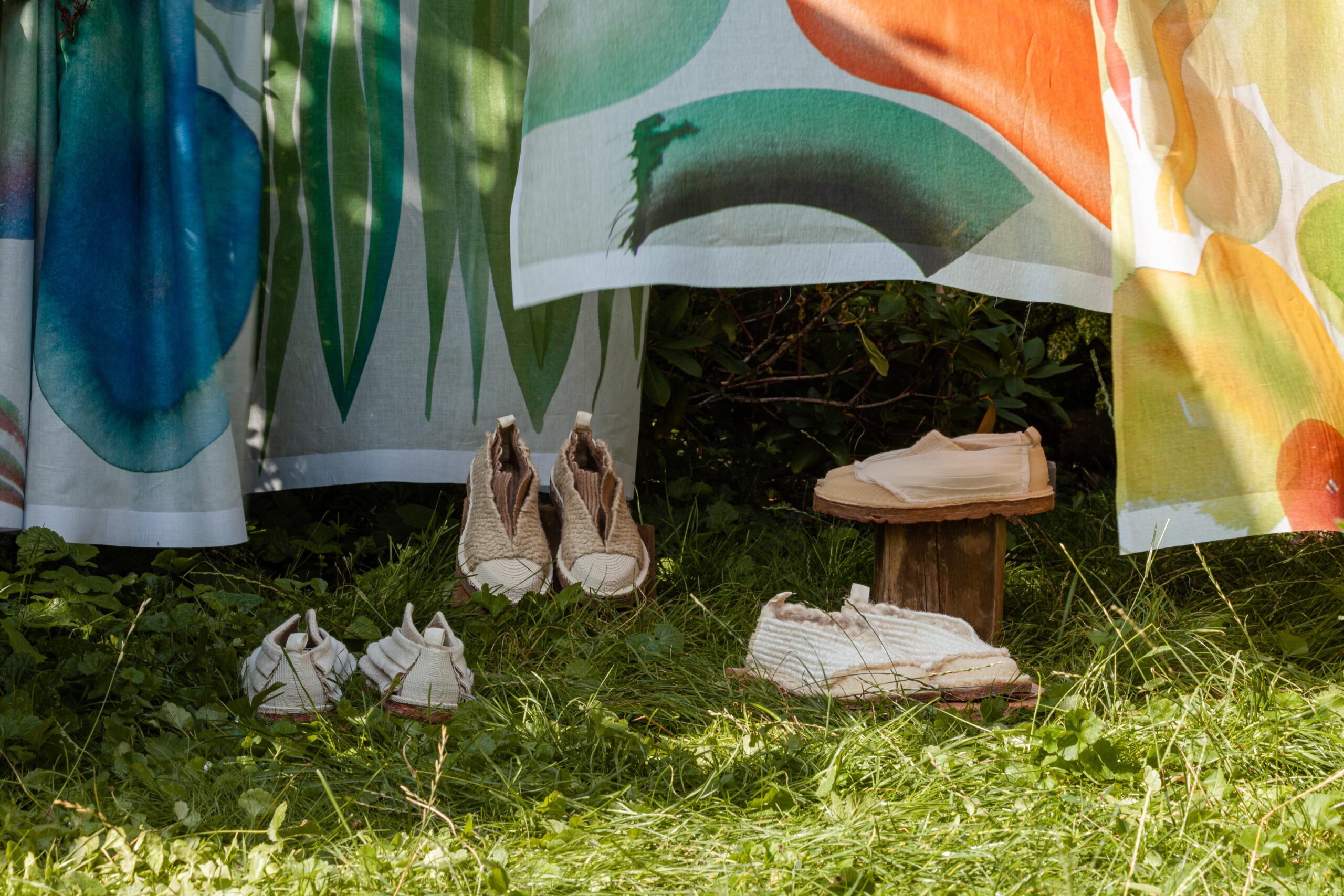 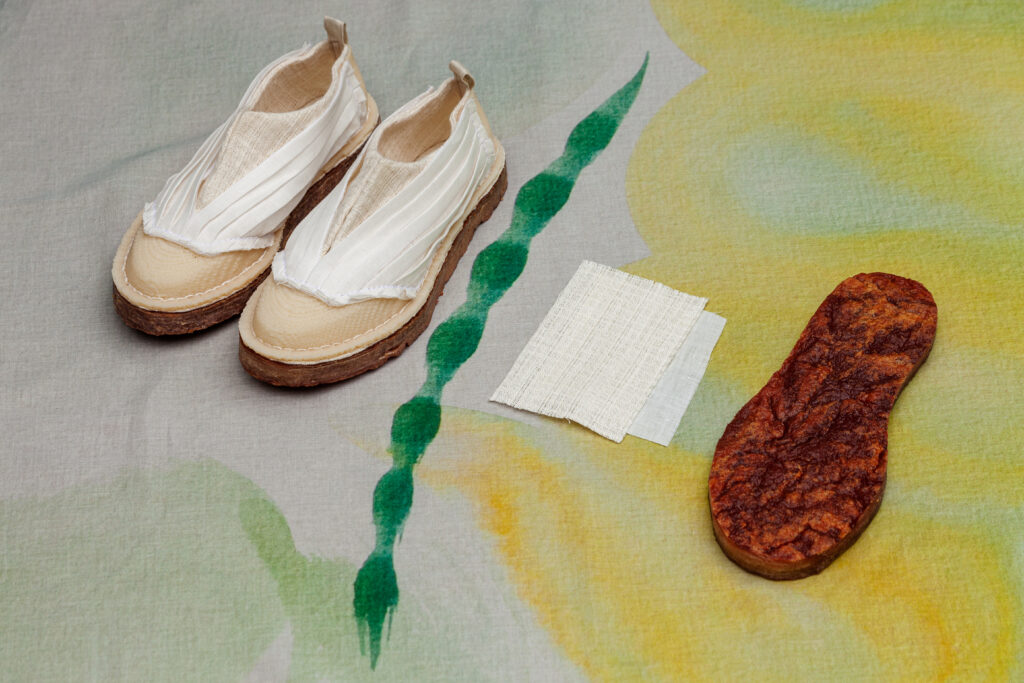 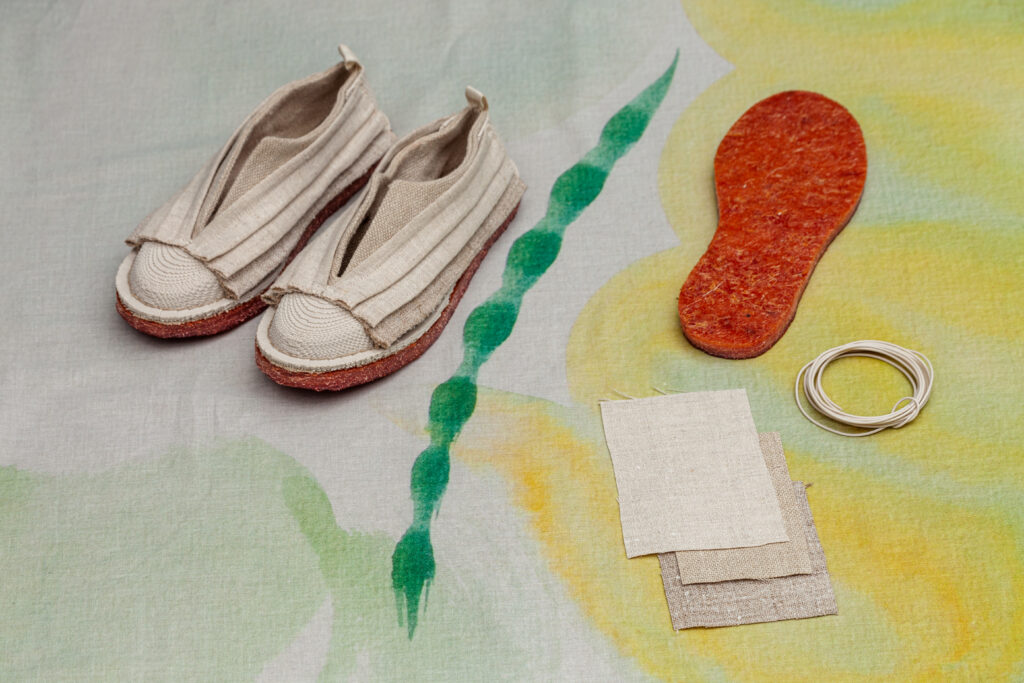 Shoe made from industrially made hemp and nettle fabric, PLA and an outsole made of natural latex mixed with cochineal dyed sisal fibres. (Image: Elisabeth Handl; Illustrations: Anastasija Mass) 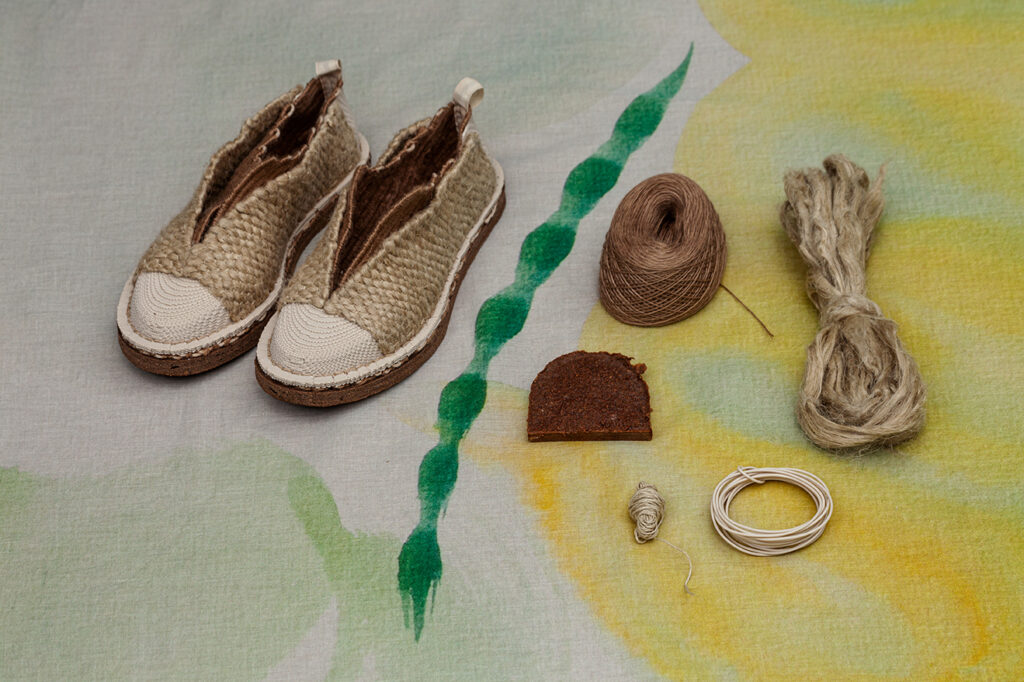 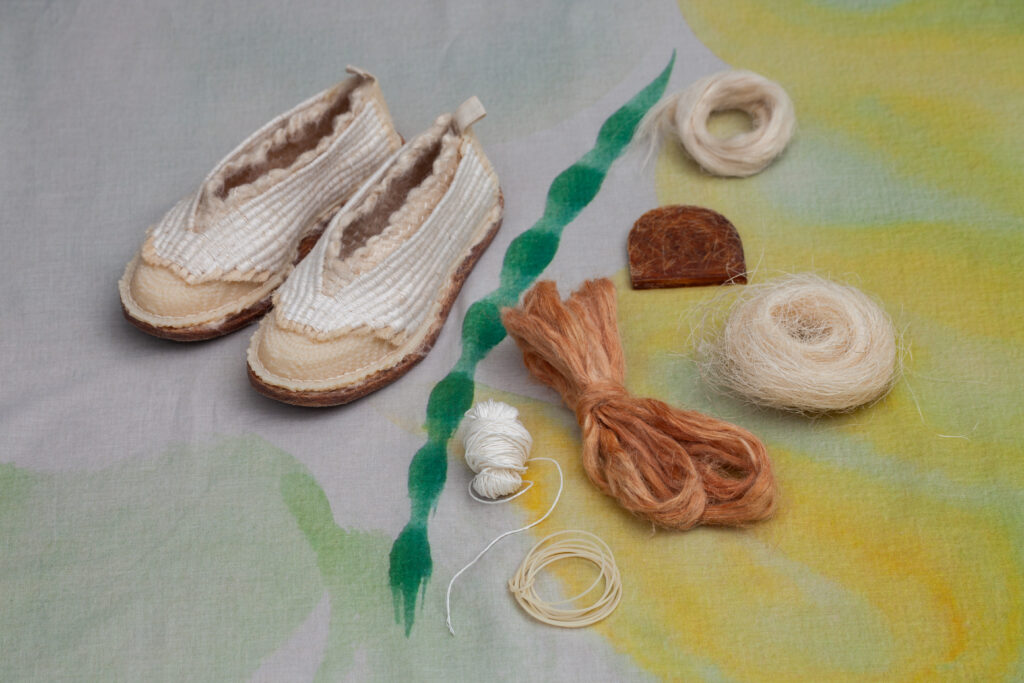