With the project Syntropia we are working on a shoe based on an already developed simplified construction built from four main components. These parts will be produced using biomaterials which can grow on the same polycultural field.
See our first blog post for a more detailed intro to our project.

After a short introduction to the people involved in Refream and the other granted projects in December, we had the opportunity during the midterm presentation in April to see the progress of the other projects and share what we have been working on together with our industrial partners over the last months.

Last Development
During the first weeks of the project we worked together with a last maker on developing a shape for the last, which is an abstraction of the human foot a shoe is built on and defines the shape the shoe will have. The process of development focuses on the physical object, which is being modified manually. In order to bridge the physical absence we worked with exchanging digital files as well as the physical last to facilitate communication. 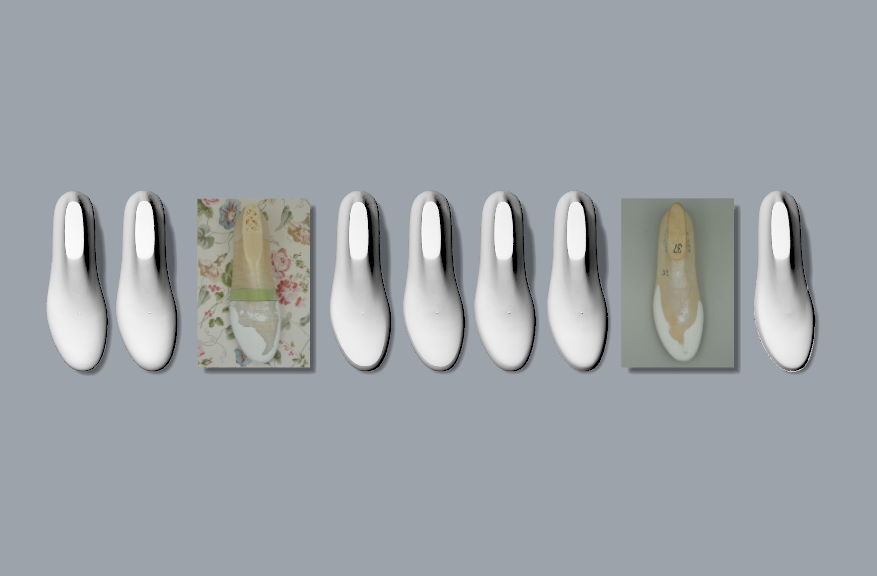 Last Grading Parametres
From the last maker we received the original file as well as the graded sizes between 35 and 42. Sander Hofstee from the University of Arts and Industrial Design (UFG) then worked on Rhinoceros and Grasshopper to reengineer the grading steps digitally. For this purpose he analysed the changes between the most extreme points of the last. He then developed a script in Grasshopper which allows for changing the last between the different sizes and will in the future allow us to grade the individual components for the directly in Rhino. 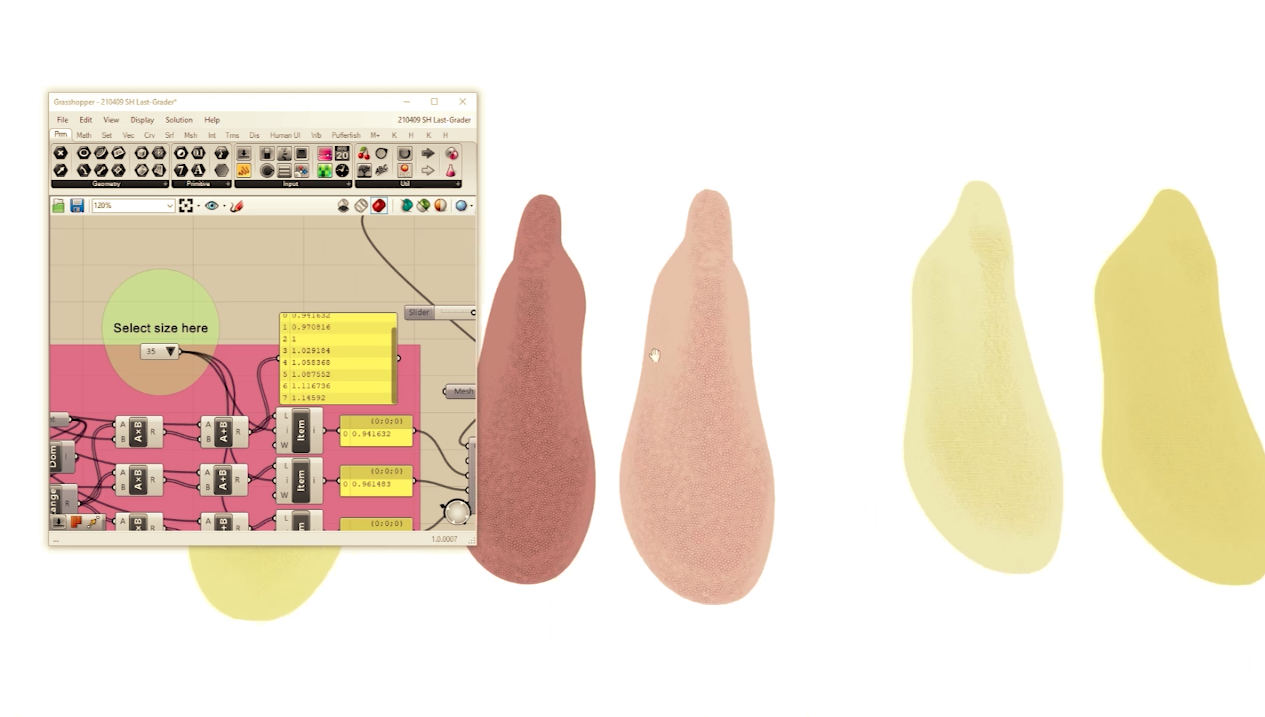 Digital Workflow
Since the frame and the outsole of the shoe are based on digital files, Sander is now working on writing a Grasshopper script for the digital workflow which allows us to design a model in one size, which can be modified and altered flexibly within the system as well as be translated into the different sizes. 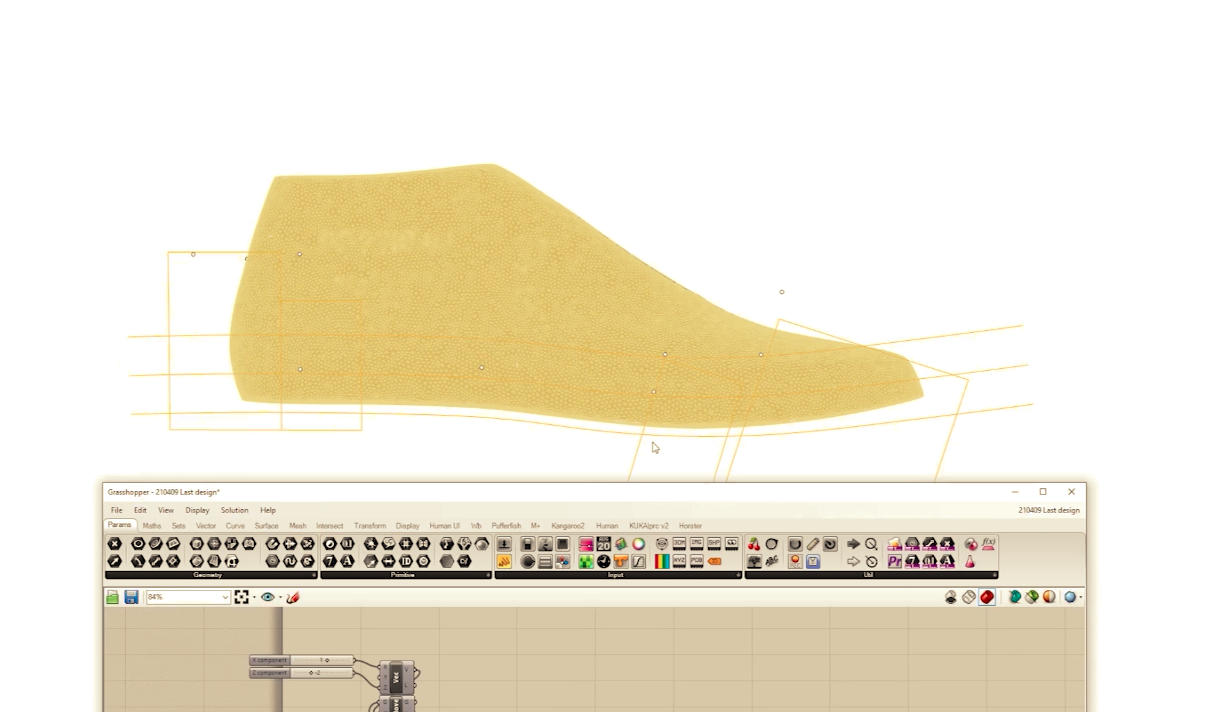 Material research
As a first step we worked on an ongoing extensive research of already existent plant and animal based materials which could be used to produce initial samples. For the purpose of defining the necessary material properties of the components we have focused on the frame and outsole as a group and the lining and the upper as another group.
For frame and outsole, for example, we focused on the research of bio based alternatives for the synthetic polymers used in most shoe production today, such as flexible PLA (PolylacticAcid) and natural rubbers as well as the plants that produce them. 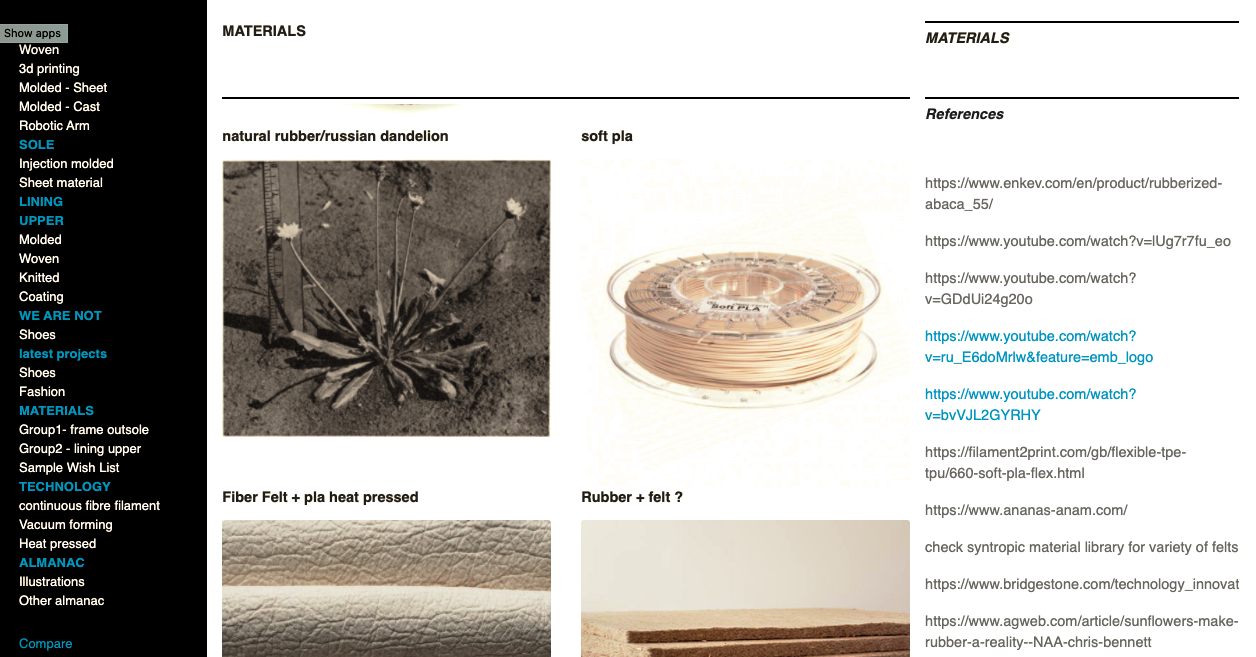 First List
From this initial research, we created a list of materials, and corresponding species, which are presently available to be ordered on the consumer market. This allowed us to create a first archive of physical samples to study, which we could also use for further experimentation.
This list contains a variety of natural fibres/fibre characteristics, threads, felts and polymers.

Working with an agronomist
Working from this initial list of species and material properties we compiled, we are now collaborating with Fernando Bautista Expósito an agronomist from Spain specialized on the development of polycultural systems in the Mediterrenean Sea basin. He is working on:

To find out more about this aspect of our project see the blog post on our collaboration with the agronomist.

Technology and Material
For the development of material and technology applications we have researched and identified a variety of technologies which could be interesting for the production of our shoes and have together with Guillaume Clement and Florian Bauer from Haratech discussed the possibilities for testing and creating samples.

3d-printing with a continuous path
One of the approaches to 3d- printing we researched is the enforcement of filament with short blended fibre or continuous thread. This on one hand serves the purpose of minimising the polymer needed and on the other hand it can have an influence on the material properties and structure of the print.

There are two approaches we are developing, one is the development of a printing path for a 3-axis printer, which is building from the bottom up layer by layer and the other is printing directly onto the last using a 5-axis robot arm. 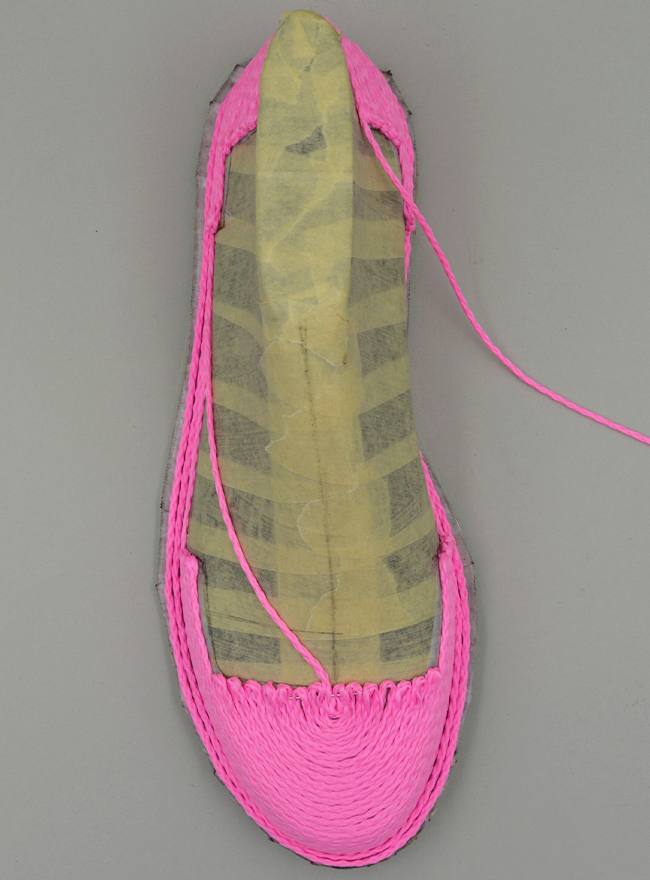 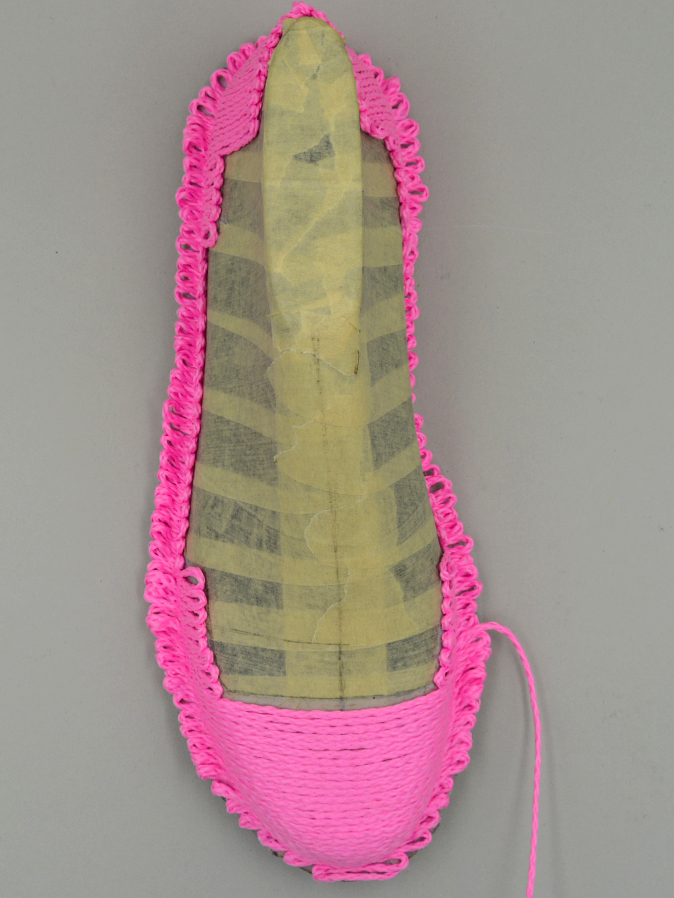 Development of Fibre Reenforced Filament with WoodKplus
Together with WoodKplus a research institute, part of the Johannes Kepler University, in Upper Austria we are developing a fibre reenforced filament. They are now working on developing 3 test filaments mixing two types of flexible PLA made from corn starch with a 1mm cotton thread, a 0.5mm hemp thread and blended hemp fibres. 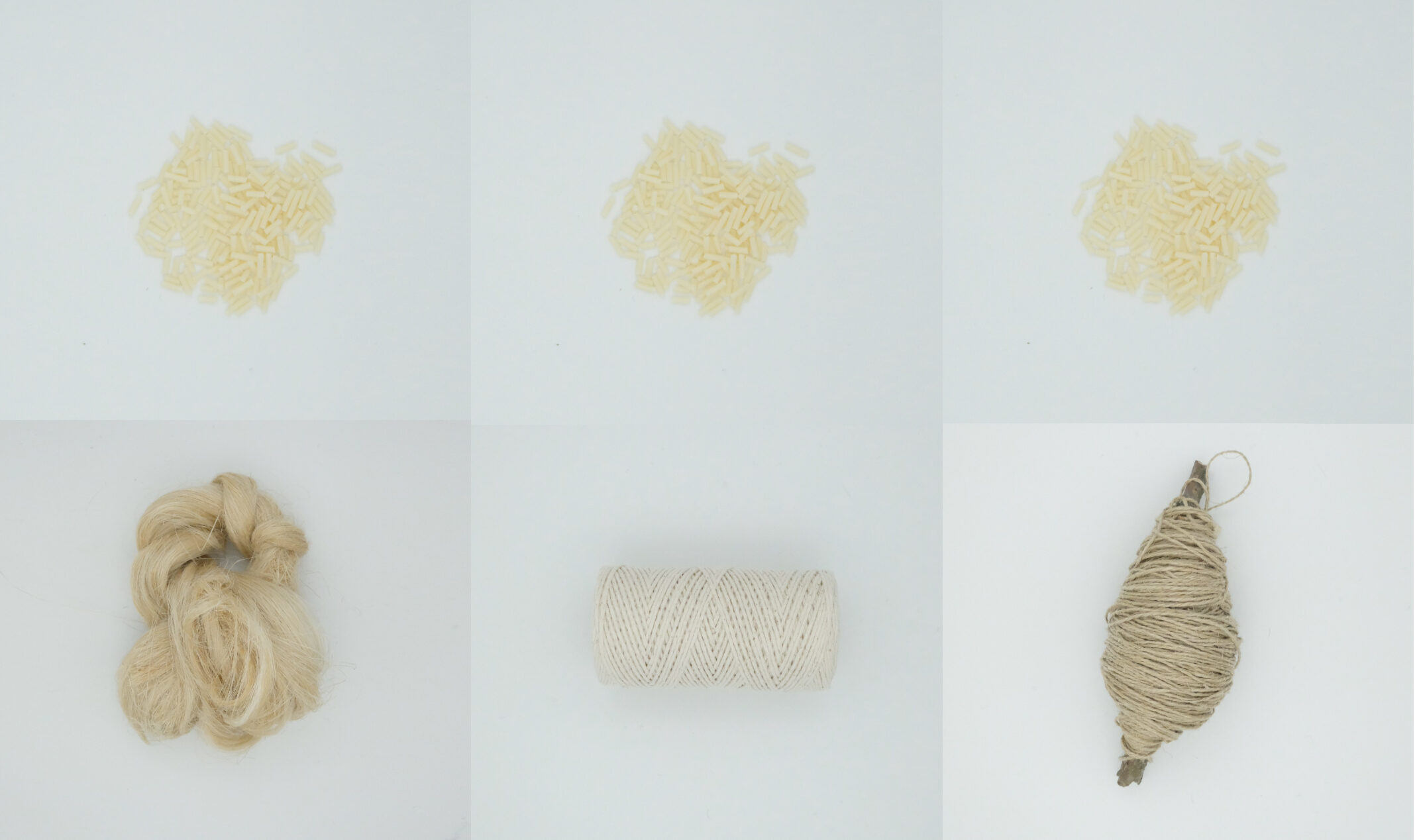 Rubber Composite
Next to 3d- printing with bio based filament, we are also working on the possibilities of using natural rubber composites. Natural rubber sap is a raw material mostly harvested from the rubber tree (hevea brasiliensis) in South East Asia. During our research we have on one hand been exploring alternatives for latex producing plants and on the other hand we are experimenting with blending latex with natural fibres to create a material composite which minimises the quantities of natural rubber needed.
Starting from informal samples made with readily available liquid latex, we have experimented with a variety of coarse fibres, such as coir, sisal and hemp, and soft fibres, such as wool, kapok and ramie.

Lactae Hevea
Rubber has to be vulcanised in order to be cured, usually this happens by adding sulphur and treating it with high temperature. During the process of research we have found the French company Lactae Hevea, which works with a process of curing with lower temperatures and water only. Continuing from the samples we have produced, we are now developing the process further with them.

Outlook
After this initial phase of research, the next step will be to confront the experiences gained from the material and technology experimentation with the results of the research conducted together with Fernando. This evaluation process will then result in the development and production of a prototype where all the findings of the different co- creation processes come together.