The project Syntropia develops a shoe based on biomaterials which can grow on and be harvested from the same regenerative polycultural field.

To see more about the previous steps of the project see our blog posts:
Syntropia, Researching Syntropia and Thinking Footwear through a Regenerative Polyculture.

Once the final species, a few theoretical locations and materials had been defined, we moved back to the shoe prototyping process. Four variations of the Syntropia shoe were designed and produced.
Each of them represent multiple aspects of the research from material experimentations to the quest of allowing flexibility in the production systems employed. Finalising these four models was fundamental to understanding the quantities of materials needed for the production of the four shoes which consequently defined the quantities of raw materials and therefore species which needed to be present in the blueprint for our polyculture. Once these final quantities were known, Fernando Bautista Expósito, in combination with the information on the geographical requirements of the location, was able to design our agro- ecological system.

The theoretical field
The field’s surface area is determined by the necessary quantities of materials to be produced and by appropriate planting densities.
The estimated cultivation area will be around 20 hectares, of which 50% will be dedicated to herbaceous crops under rotational irrigation and 50% to permanent or semi-permanent rainfed woody crops, where irrigation water will only be used as support in the event of drought and below an allocation of 7m3/Ha.

The estate in question will be a valley open to the northwest, surrounded by hills that close off to the southeast. The slopes of the hills will incline towards the practically flat bottom of the valley with an average gradient of 6%, forming a micro-basin that will receive water runoff. The texture of the soil is a mixture of clay loam to silty loam with abundant pebbles that have come to the surface as a result of erosion, especially on the hill slopes. At the bottom of the valley where the arable crops will be planted, the texture will be the same but enriched with the fine material dragged down from the hillsides. 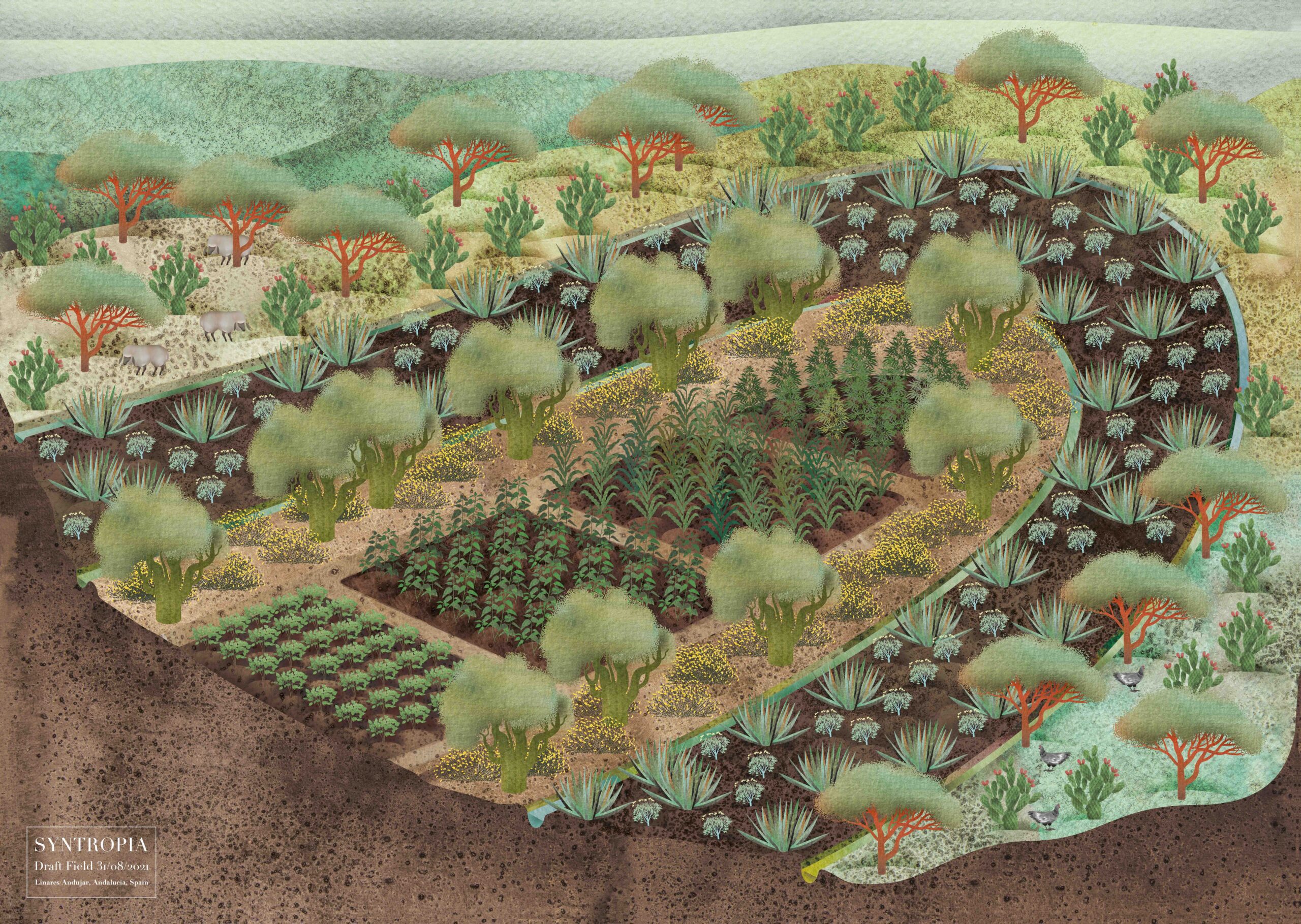 The draft of the Syntropia polyculture (Illustration: Anastasija Mass)

Band 1
A band of prickly pear will occupy the crest of the hills. The plant is very hardy to drought, so it will be planted in the area with the worst soil conditions.

The planting frame for this band will be 1m x 0.6m, with a width of 5 m and an approximate linear length of 1570m. In total there will be 6 lines of prickly pear in an area of approximately 8000m2.

In the aisles and every 6m, fig trees will be planted in order to protect the prickly pears from the wind and to provide shelter and food for biodiversity.

Right at the lower edge of the prickly pear band, the construction of the first of the infiltration trenches with a width of 2m, a length of 1500m and a height of 0.5m, some 3000m2, is planned.

This will serve to reduce run off from the headwaters, store water, and increase the infiltration time to improve the water level in the subsoil.

To reinforce the trench wall, four lines of spanish broom will be planted in a 1m x 1m herringbone frame. The nectar flowers the plant produces are important for pollinating insects.

The spanish broom is a legume with the capacity to create mycorrhizae with the Rhizobium sp. Bacteria, a bacteria which fixes nitrogen in the ground and will fertilise the surrounding soil.

Following this band, a new swale will be created, 2m wide and about 1300m long, with about 2600m2 of water retention.

The transition between the second swale and the valley floor area will have a total of 37000m2 which will be occupied with a 7m x 7m herringbone plantation of olive trees (Olea europaea).

In the central lanes species such as false yellowhead (Dittrichia viscosa) will be planted to reduce the effect of pests, such as the olive fruit fly (Bactrocera oleae).

Spanish broom will be planted in a single line in the centre of the olive tree lanes.

The central plot
The central plot of the valley will be similar sized sections of around 25000m2 separated by paths. The boundaries will be planted with species such as the Andalusian barberry (Berberis hispanica) which can be used as bird shelter. The fruit can be used for dyeing.

In the four fields created in the central plot we will use the farming practice of crop rotation.

Every year or every few years the field is occupied by one species and then followed by another.

This practice allows us to plant annual species without depleting the soil from nutrients.

Rotations will be established following the pattern: nettle (Urtica dioica), then fallow (when no vegetation is planted on the field in order to let the soil rest), then hemp (Cannabis sativa), then potatoes (Solanum tuberosum).

This order of rotation is established because nettle needs higher levels of nitrogen in the soil. This, however, would be detrimental to hemp and potatoe.

The management of the vegetation cover with mechanical means will be complemented with the livestock of 35 Segureño sheep (Ovis aries – segureño).

100 hens (Gallus gallus domesticus) will be used for pest control between crops and protected from natural predators by electric shepherds.

During the night the chicken will be stabled in a facility specially built to extract manure for mixing with the plant waste to be composted.

An adjacent farm of 10 hectares will be considered, where alfalfa (Medicago sativa), oats (Avena sativa), barley (Hordeum vulgare) and natural fallow land will be sown to feed the Segureño sheep livestock in the event that the inter- cultivated vegetation cover or the nature of the crop itself does not suffice.