Combining 3D fabrication with agronomics, the Syntropia Re-FREAM project initiated by Sophia Guggenberger and Eugenia Morpurgo investigates circular manufacturing from seed to shoe. The material components for their bio-based footwear can be harvested from one polycultural field. Flexible and modular, the design framework adapts to seasonal yields and differing plant constellations. As Guggenberger explains, their shoes do not only dress feet: “a product can be a tool for achieving other things”; a holistic manufacturing approach, which encourages the regeneration of ecosystems.

By re-centering material resources, the team developed a flexible design framework rather than a fixed outcome. Guggenberger’s previous research on shoe production based on local and open source fabrication provided the basis for four footwear components: upper, frame, lining, and outsole. With the support of UfG, the team developed a digital workflow for developing and grading the components of the shoes. The four design prototypes demonstrate how the shoe components can be manufactured with a variety of produce.

The materials needed to fulfil technical requirements of each of the footwear components. Haratech put the designers in touch with WoodKplus. Together they developed different bioplastic filaments, produced from PLA, made from corn starch, cotton, hemp, and cork. Their ingredients were sourced by the designers from produce which one geographically localized field can potentially provide.

The co-creation project approaches footwear through a radical reevaluation of construction, materials, and location specific production. It is modular: the components are not glued, which allows for their separation and repair. The use of low threshold tools and a modular last system minimizes the use of resources. The shoes are produced with a range of bio-based materials and fibers, ranging from handwoven to industrially produced hemp and nettle-based fabrics, to natural latex mixed with cork and fibers. Dyes were derived from nettles, cochineal and onion peel. In order to determine the optimal location for seeding and harvesting the materials, the team drew on the expertise of the Spanish agronomist Fernando Bautista Expósito – which led to an exploration of Mediterranean territories, offering a wealth of different climatic zones. By using a software for geographical information (QGIS), Expósito was able to map the optimal growing areas by species, narrowing the selection of plants, focusing on the windswept and arid region of Andalucia and its grasslands. Beyond natural resources, local economic and labor ecosystems, such as proximity to existing manufacturing areas and land zoning, were also taken into account.

Four variations of the shoe were designed and produced with different material combinations. The outcomes are not just highly textured round-tipped shoes, combining hand-woven fibers with 3D printing, but a groundbreaking proposition of new production processes, tailored to specific localities. A publication in the format of an almanac documents the conceptual framework. By sharing practical tools on how to enact with the environment, the team aims to engage and connect with a larger community. The concept is rooted in the replacement of mono-cultures with a diversity of plants advocated by Ernst Götsch. His transdisciplinary definition of syntropia, a regenerative alternative to extractive production processes, draws on ethics, physics, philosophy, botany, and technology. The co-creation research encompasses mapping the optimal material resources, including a field’s location and plant composition – and the integration of seasonal variety. Working with flexible resources for flexible products enables a deeper understanding of the natural development of the ecosystems. It is also allows for highly agile and adaptable paths of manufacturing.

The team has identified the field blueprint which defines the plants, and the materials, and animals such as bees and sheep within the pasture. They estimated a cultivation area of around 20 hectares is needed to make their shoe design, divided equally into herbaceous crops under rotation and irrigation and permanent or semi-permanent rainfed woody crops. With Expósito’s help, they were able to narrow it down to several ideal locations.

The team conceives the field as a process, a place of labor where things grow that are then shaped into materials. A practice which can increase biodiversity, protect the soil, and is part of a regenerative ecosystem that includes food production, animals and people. As Mopurgo explains: “it’s never just about the plant, or just about the shoe. It’s about the beginning and the end – and how the end becomes the beginning”. 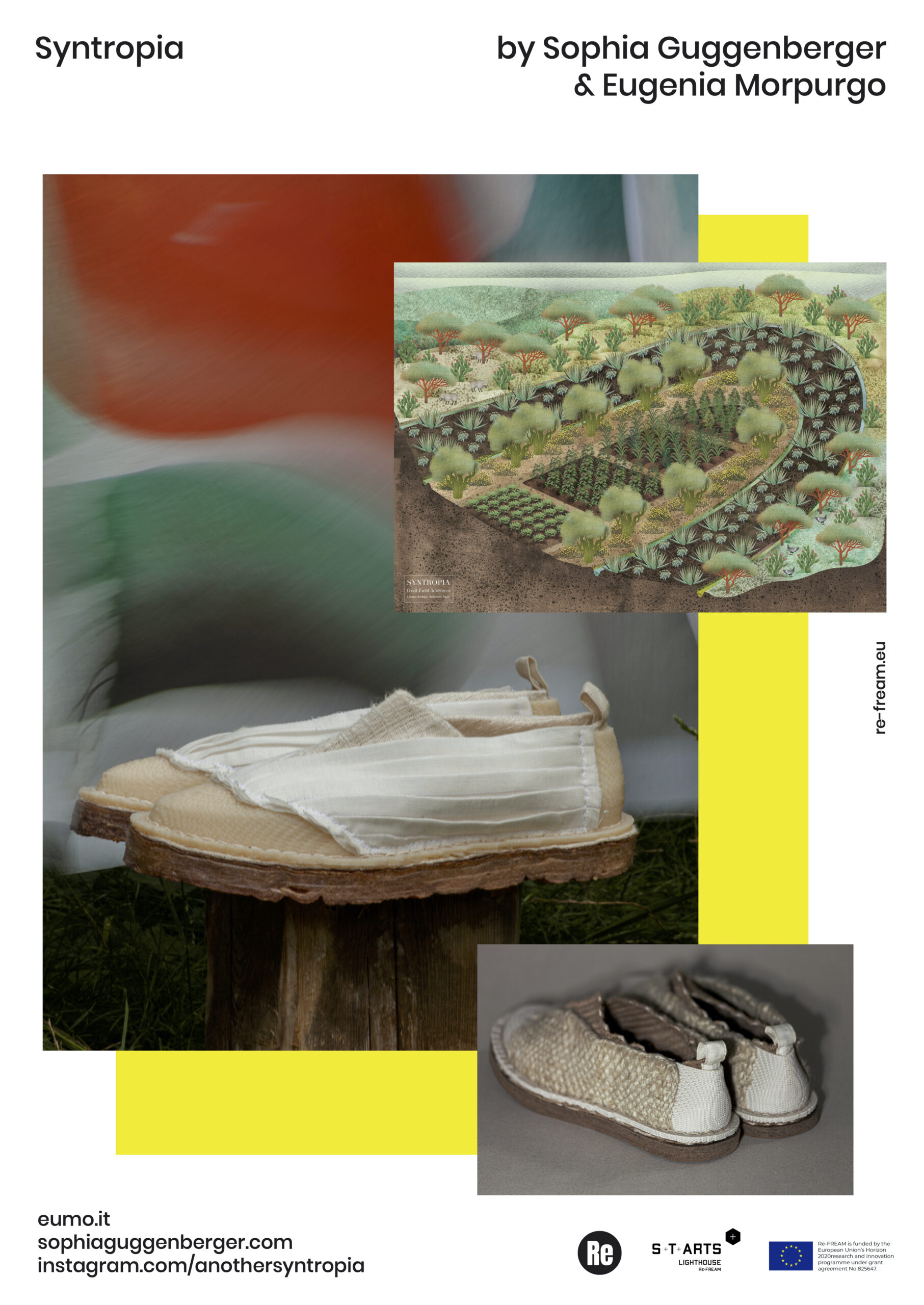 The team worked within the Additive Manufacturing Hub of Re-FREAM. The Re-FREAM partners Haratech, WoodKPlus and the Fashion & Technology department at the Kunstuniversität Linz collaborated on 3D printing techniques, and material development to produce the 3D-printed components of the shoes. Empa provided counsel on material properties and testing.

Guillaume Clement, Haratech, about the project

“Sophia’s and Eugenia’s project is a striking example and genuine inspiration to achieve a meaningful and complete sustainability in shoe design, manufacturing, use and end-of-life.”

Sander Hofstee from the University of Arts and Industrial Design (UFG) reengineered the grading steps for the shoe lasts digitally on Rhinoceros and Grasshopper. Agnes Psikuta from Empa shared insights on the shoe’s thermal regulatory system, while Guillaume Clement and Florian Bauer from Haratech advised on the possibilities for 3d printing, testing and creating samples, and put the designers in touch with WoodKplus.

Together they developed 3D printable fiber-reinforced filaments. The filaments needed to fulfil the technical requirements for the frame of the shoe. The designers 3D-printed the frames of the shoes with flexible PLA filament. The outsoles are made from natural rubber and fibre compounds, and cast in molds. Outsole material tests included rubber and cork dust, sisal fibre, wool fibre and fibre of the spanish broom.

Together with the Spanish agronomist Fernando Bautista Expósito, they developed the design of the polyculture, while with the French company Reltex they worked on some material testing. Furthermore they collaborated with illustrator Anastasija Mass and photographer Elisabeth Handl for the production of the project documentation. 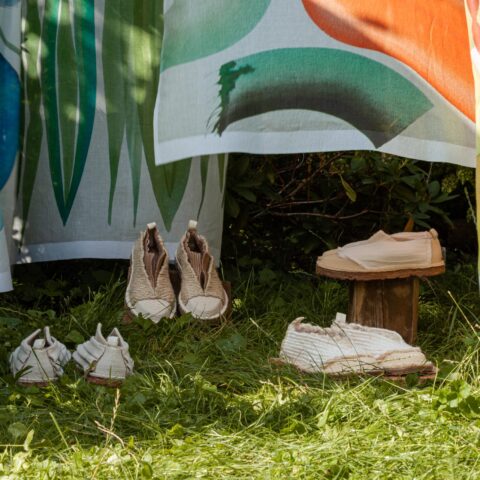 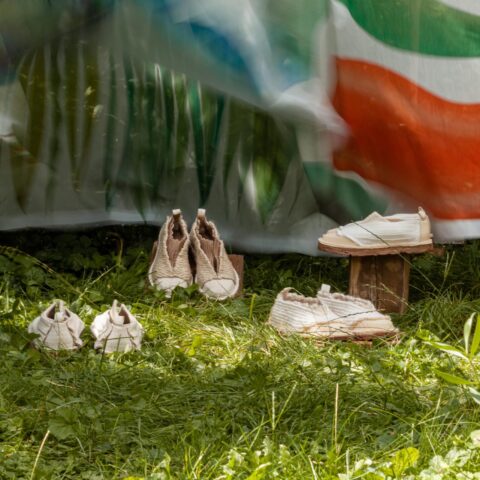 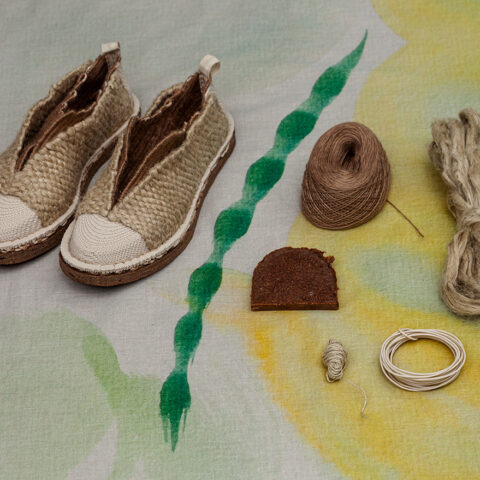 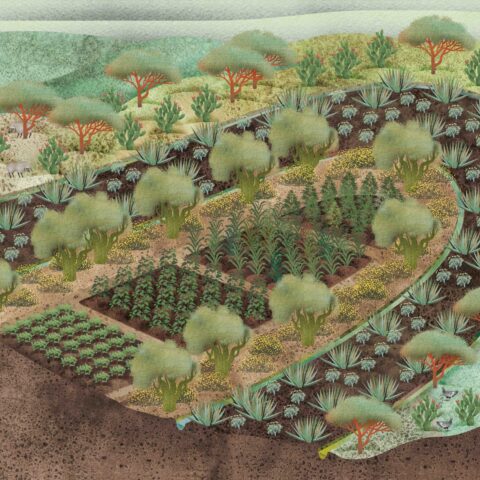 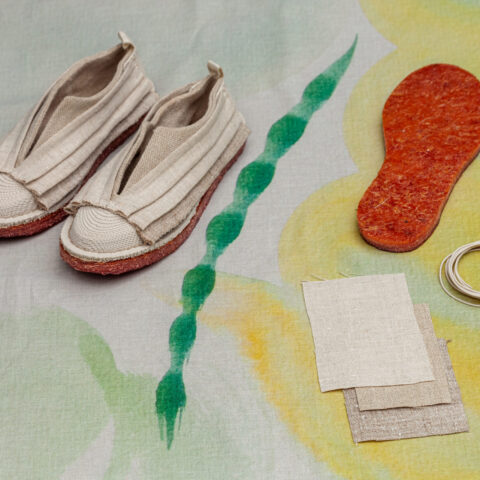 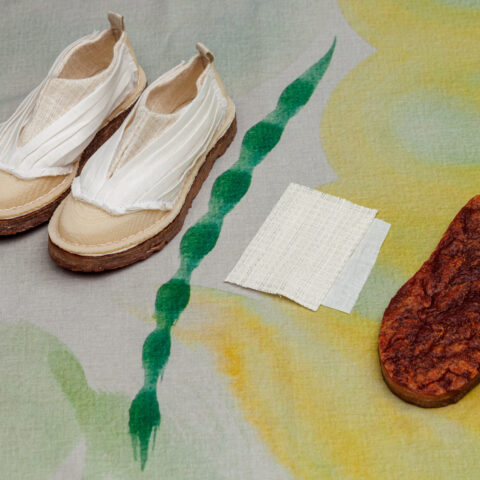 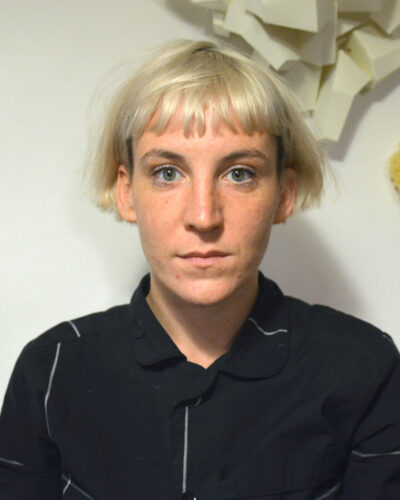 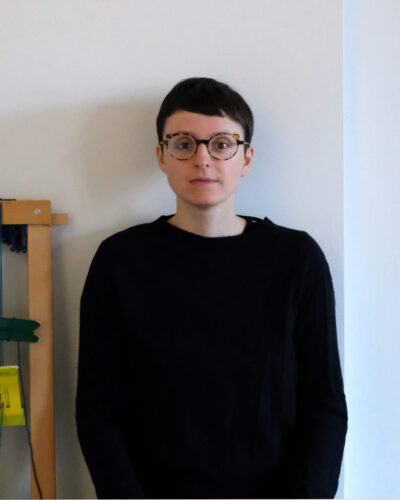 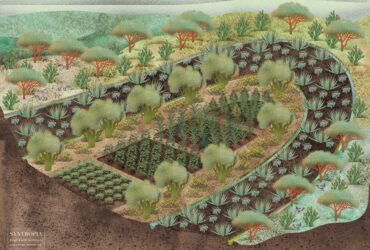 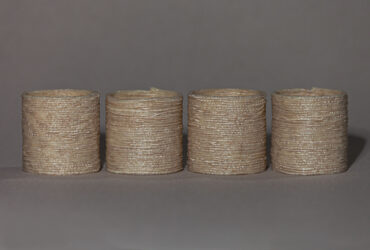 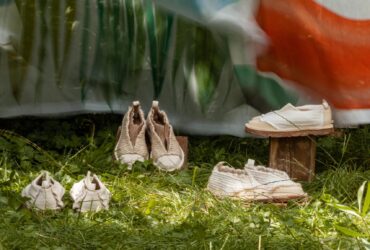 Thinking Footwear through a Regenerative Polyculture 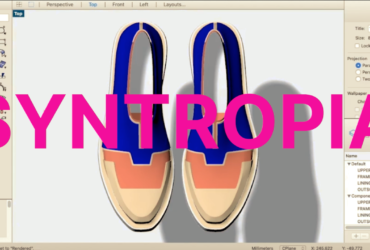 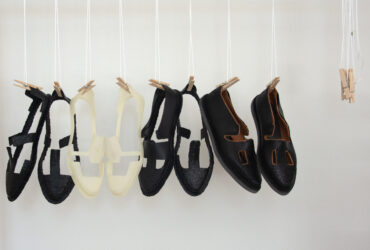