Last time we showed you our design process for Ignotum. Once we had come to a design we all were on board with, it was time to start making it into a real working thing. This blog post will be a bit longer than usual, as we have to cover a lot of ground. Hope you still enjoy it! 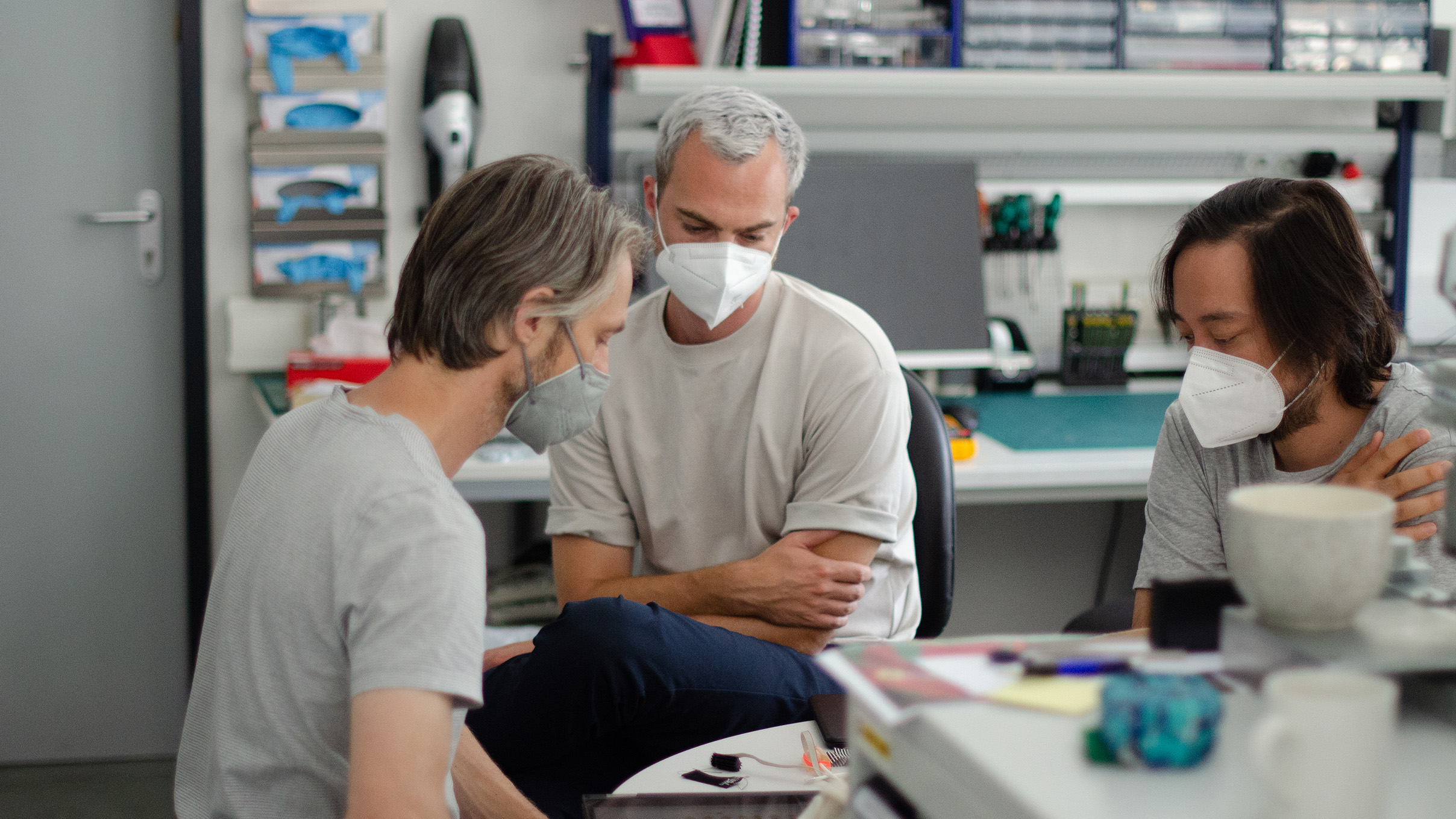 After co-creating the technical concept with Christian Dils, he and his colleagues at the Fraunhofer IZM went into full action. Kamil Garbacz and Christian developed the PCB that would distribute the power to our 9 LEDs. Together with Lars Stagun (Fraunhofer IZM), we bonded all the electronic parts to the textile cable (Amohr Technische Textilien) prepared by Sebastian Hohner (Fraunhofer IZM). This process is called NCA bonding (non-conductive-adhesive bonding, internally at the IZM also called e-textile bonding), and creates a really strong connection between electronic boards and textiles (and as a result also strong electrical bonds). This can be later on checked with x-rays. Very cool. 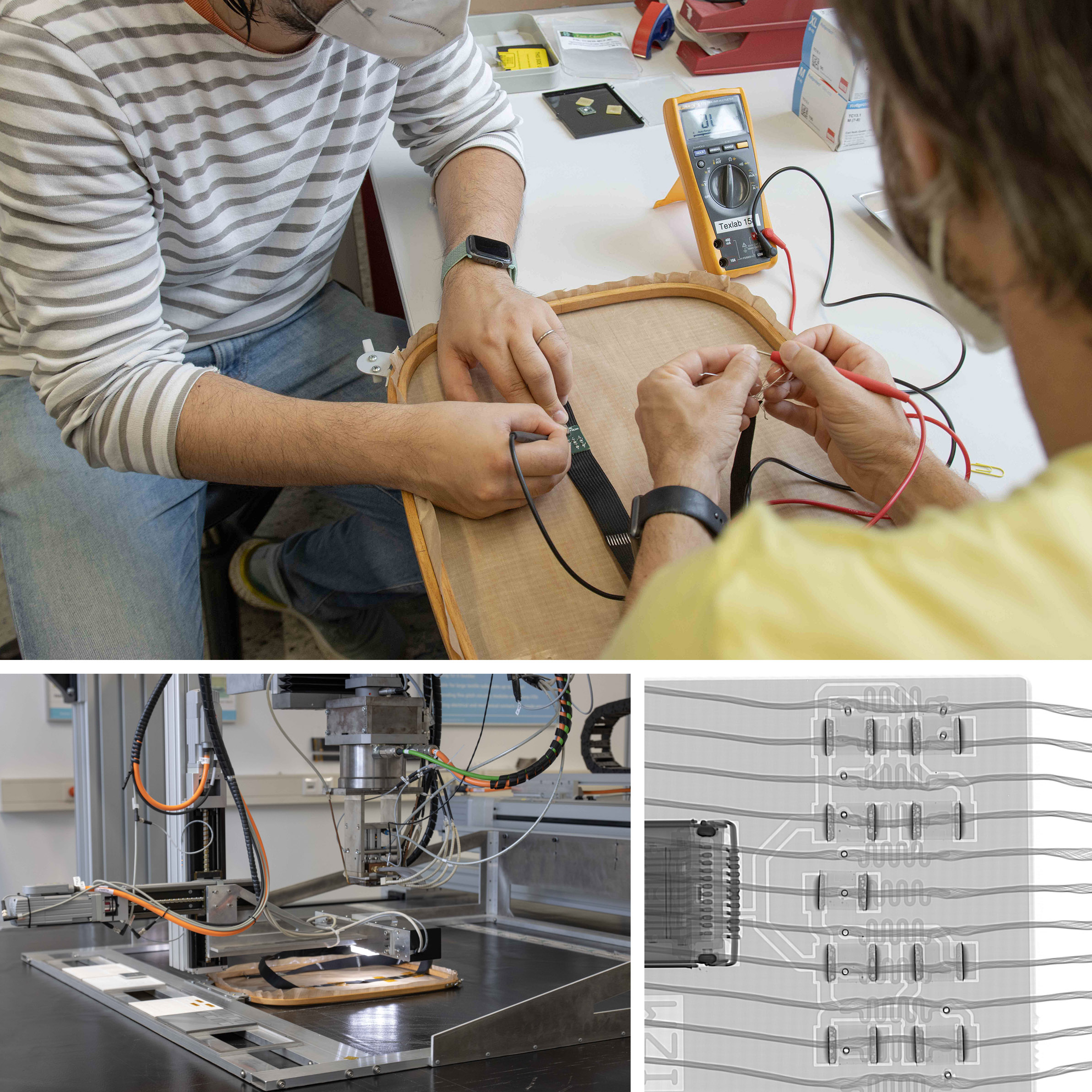 Once everything was bonded we had to solder the LEDs to the textile cable connectors, and our electrical cable harness was finished and ready for the next steps.

In parallel, we designed and finalised all the different housings to protect the electric parts and especially the electrical connections from breaking. As stated previously, we made them all reopenable so we could, later on, repair any technical parts. This came in very handy, as we broke one of the LEDs when doing the final assembly and were able to exchange it ourselves in the studio. All these housings were 3D printed with our in-house printers, tested, post-treated and then later on assembled by us. 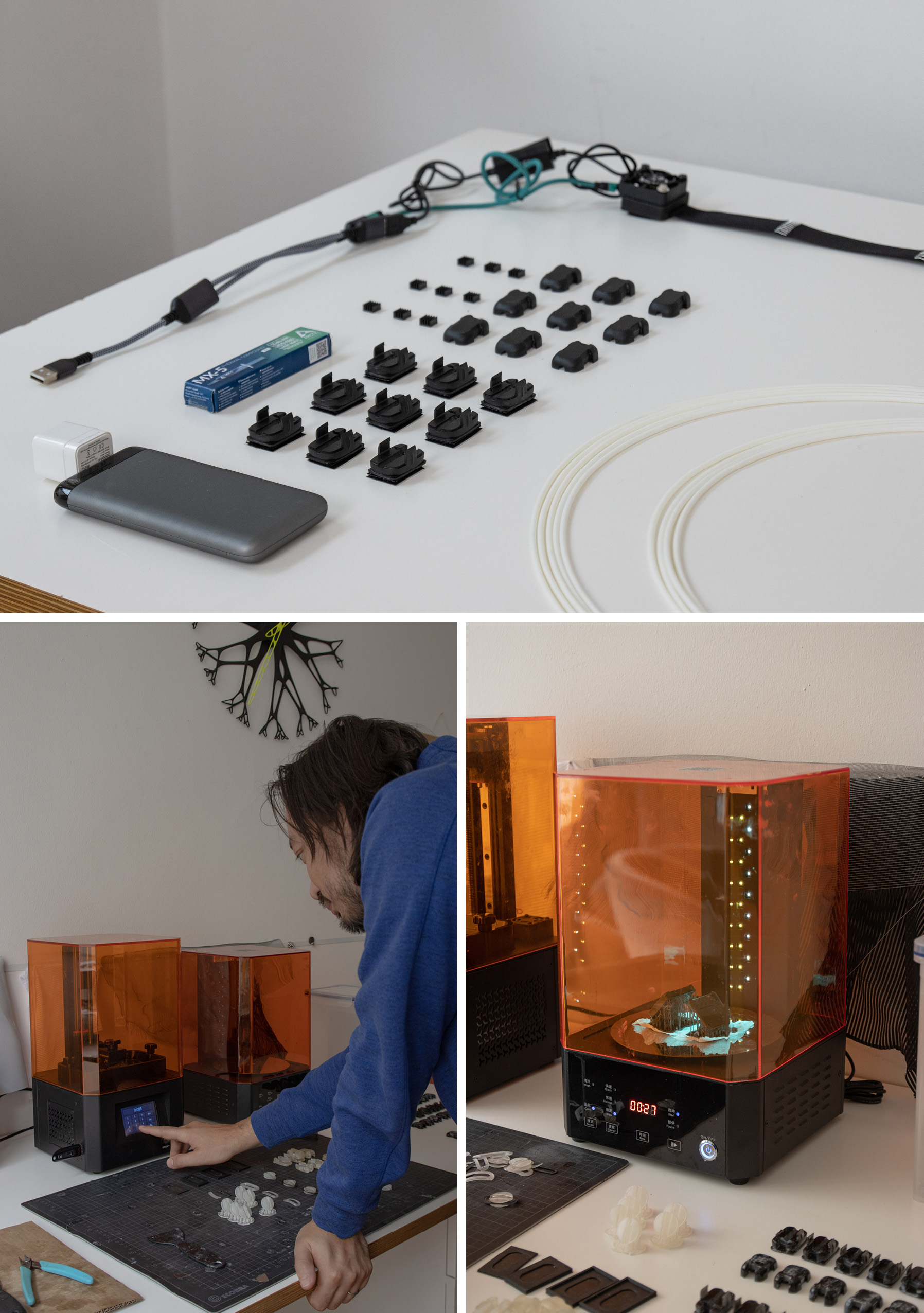 Due to the high energy flow going through the main PCB we measured really hot temperatures, mainly on the resistors (>100°C!). So to prevent our model later on from getting burns, we had to quickly come up with a cooling solution – a basic heatsink-and-fan setup brought the temperature down to acceptable levels (touchable). 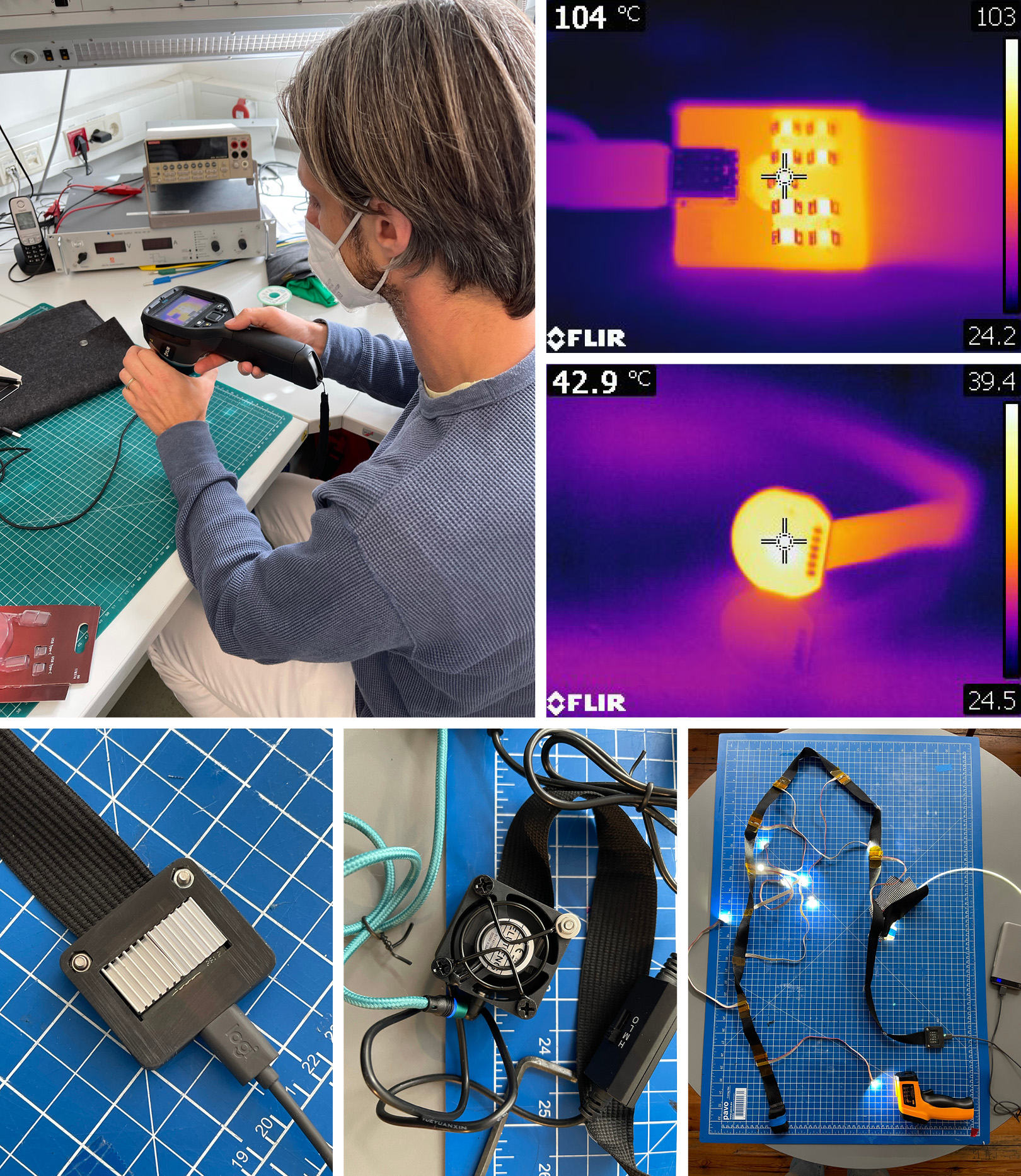 Mira Thul-Thellmann sewed the garment for us, both the base and the moiré layers. She really did a fantastic job, as it was very hard on her eyes with all the striped fabrics. We wanted the connection between the two layers to be very easily repairable, so we designed special buttons that also function as clips for the light fibres. This worked really nicely in tests, but the strengthening of the textiles around the buttonholes proved to be tricky with traditional techniques, due to the sheer number of holes as well as the very light moiré textile. So, inspired by the IZM bonding process we came up with the idea of 3D printing button hole plates and then heat bonding them onto the garment using a soldering iron. It worked incredibly well and also saved us a lot of time. 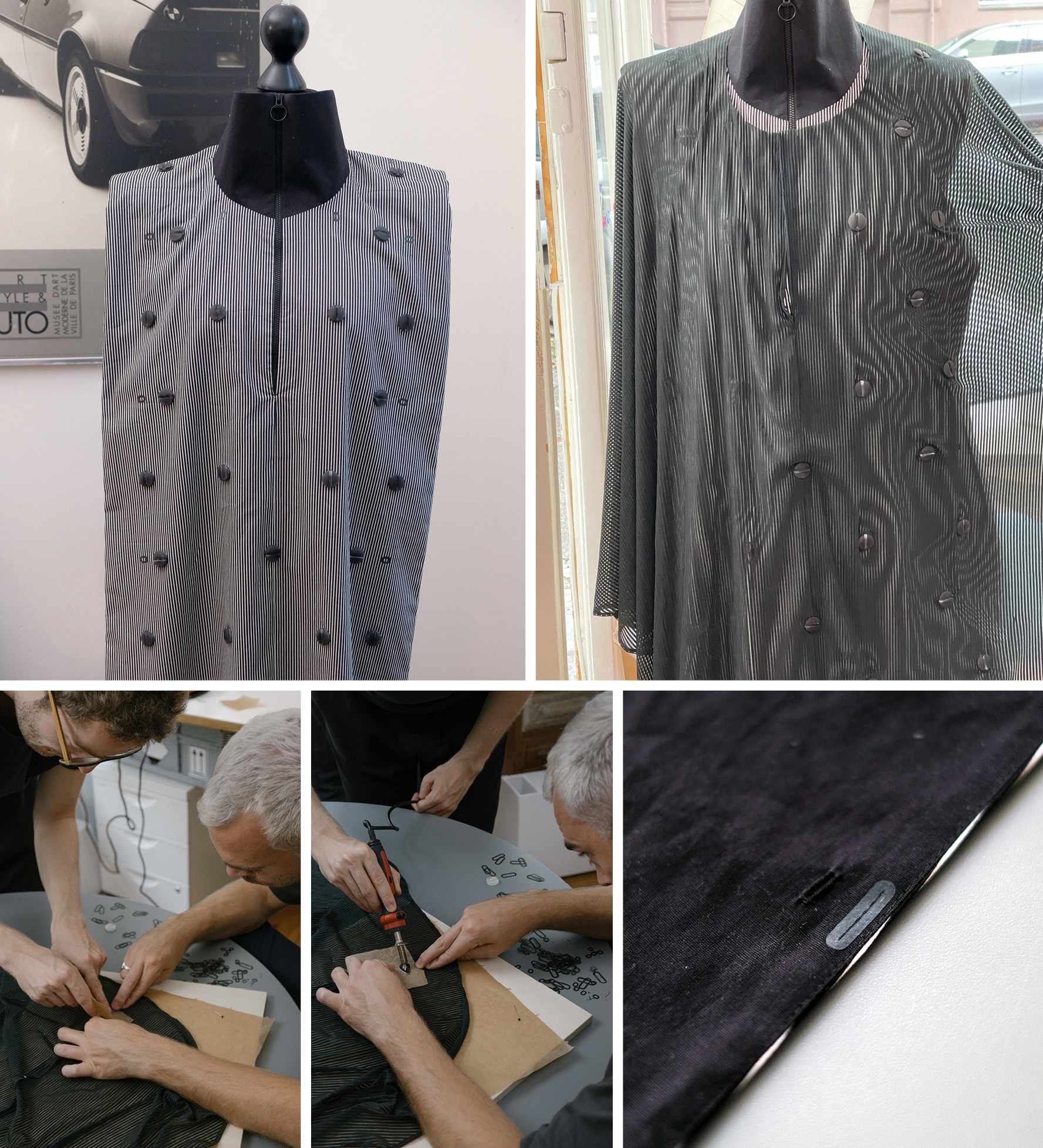 Once we had our “kit” together, the final assembly started. Although it was a bit tricky getting the cable harness into the garment, we managed to get it all well together in the end. Big thanks to my incredible team members Max Krenn and Markus Mau (long overdue) that supported the project in such a great way! 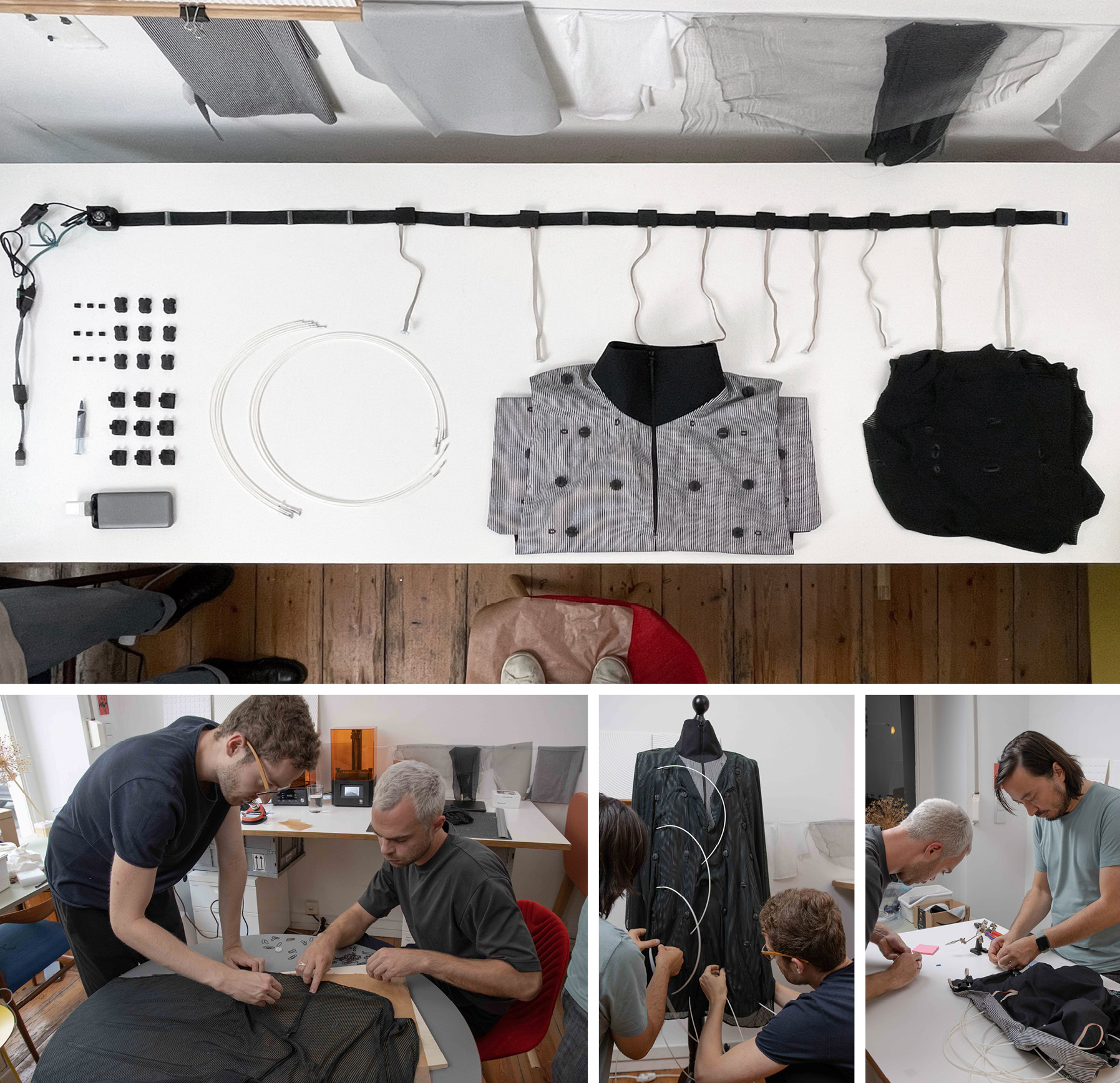 Now it was time for the final test – would the real thing perform in the same way as the virtual one? We were quite nervous setting up our AI CCTV again, and super happy and relieved when we got very similar results with Max wearing the prototype. Phew.

To get a bit into the performance of Ignotum: in some viewing angles the AI tilts between seeing a person to varying degrees (0-90%), but as soon as motion, another person and a more lively background are added to the picture, the “connection” to a person is broken and far from stable enough to follow anyone wearing the garment, to the point where the person is invisible to the AI.

In the next and final post, we will show you the high-quality images of the prototype and renders of the final design (which is very close to the prototype). The main difference is the utilisation of 3D printed light guides using Stratasys’ flexible Agilus resin. A first test sample has been produced by Pavel Kulha of Profactor, using the so far most promising light guide designs from our test with Rafael Jordan of the Fraunhofer IZM. It would be great to further develop this idea in the future with a technical partner, as we see great potential here for protective wear. 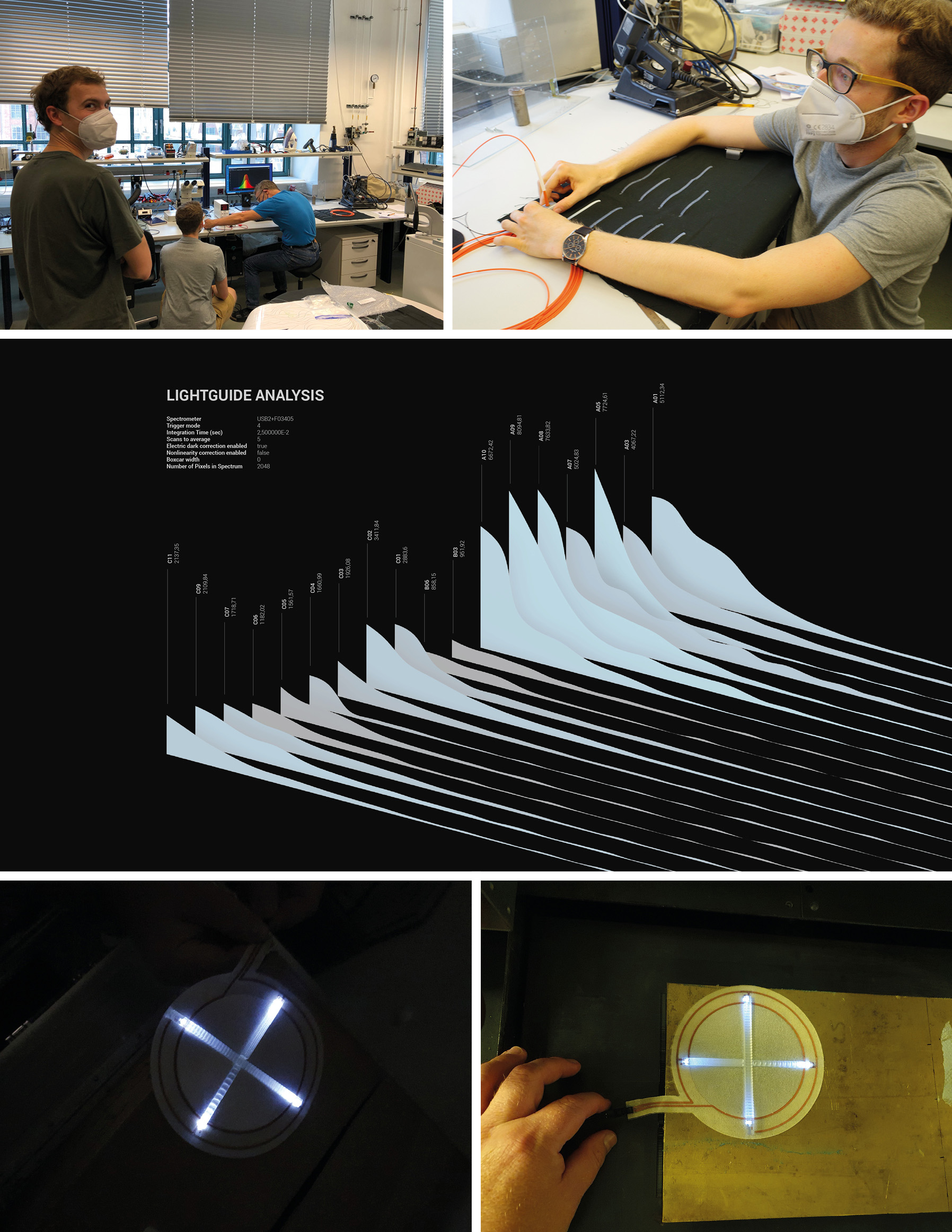