For Anke Loh, garments can be instruments. By creating sound through touch and gestures, her Re-FREAM designs encourage movement and joy. Deeply concerned about the loss of human tactile interactions during times of social distancing, Loh embeds technology into clothing to foster psychological wellbeing. Her Life Space sweaters enable us to listen to our own bodies, and to those of others.

Touch (and staying in Touch) – formerly called “Embroidered Touch” – explores meaningful human-to-human interaction in a time of social isolation. Whereas traditional smart textiles focus on functionalities like protection, Loh uses technology to give fashion ears and wings. Her research began with the concept of enabling adults to communicate with each other through garments containing conductive yarns. Loh’s first steps explored sensory properties of yarns, including touch, temperature and other stimuli. Her research led to the use of TexPCB technology, a laminated conductive fabric circuit board from the Fraunhofer Institute, combined with knitting and embroidery techniques.

The Re-FREAM collaboration resulted in two sweaters for adults, which communicate through sound and also change color in response to touch and body heat. In the final stages, inspired by watching her nephews and nieces play, Loh added two sweaters for children. Apart from using this innovative hardware, Loh worked on software for the first time, to capture and calibrate the sensory input into sound output. She estimates that 40% of her research time was spent working with her web engineer, including developing the interface of the site and its walkthrough. Embracing technology as a medium for experimentation became essential to her research process.

The two adult sweaters feature a multicolored wing-shaped design covering the arms which connects to a circuit board integrated in the back of the design, placed between the shoulder blades. Different audioscapes can be triggered by wearers through gesture and touch interactions. The sounds are a mix of field recordings from nature and urban spaces, and touching different lines elicits new sound discoveries. The process is highly intuitive, as Loh explains: “You may stay with a certain sound, or if you are curious, you could go to different spots on the arm. If you find something you like, you may go over it a few times.” The sweaters also feature two embroidery lines which connect to a heat-sensitive embroidery, that changes color.

The children’s sweaters feature a TexPCB application positioned on the front of the garment, in the shape of an ear. When the child touches it, two sound files are activated. One generates animal sounds, a zoo-like experience of elephants, bees, birds, cows, dogs and cats. The second sound file is an American nursery rhyme, spoken by Christine Shallenberg, a close collaborator from the Anke Loh Studio Team. Activated at different times, it creates a choir. All of the sweaters link signals generated by touch to a circuit board, and connect via Bluetooth to the website https://embroideredtouch.art/#/.

During her fashion career, Loh has designed for children’s collections, men’s collections, and women’s collections, ranging from low end to high end. She likes all of it, she says, because she really likes people – and fashion really brings people together. But, she adds, “something went wrong along the way with all this stuff, which nobody needs.” To her, the beauty of the Re-FREAM collaboration is the ability to create clothing with true and meaningful value again, as when the sweaters cause a child to just sit down a little while to listen, and feel their body.

Loh would like to raise the funds to refine and advance her prototypes to the next level, and work with different conductive threads and new ways of integrating of embroidery and knitting. The TexPCB technologies have opened a broader scenario for additional garment placements, which she would like to develop further. Having had a glimpse at the Valencia Hub’s sustainability technologies regarding different dyeing techniques, she discovered another direction to explore as well. 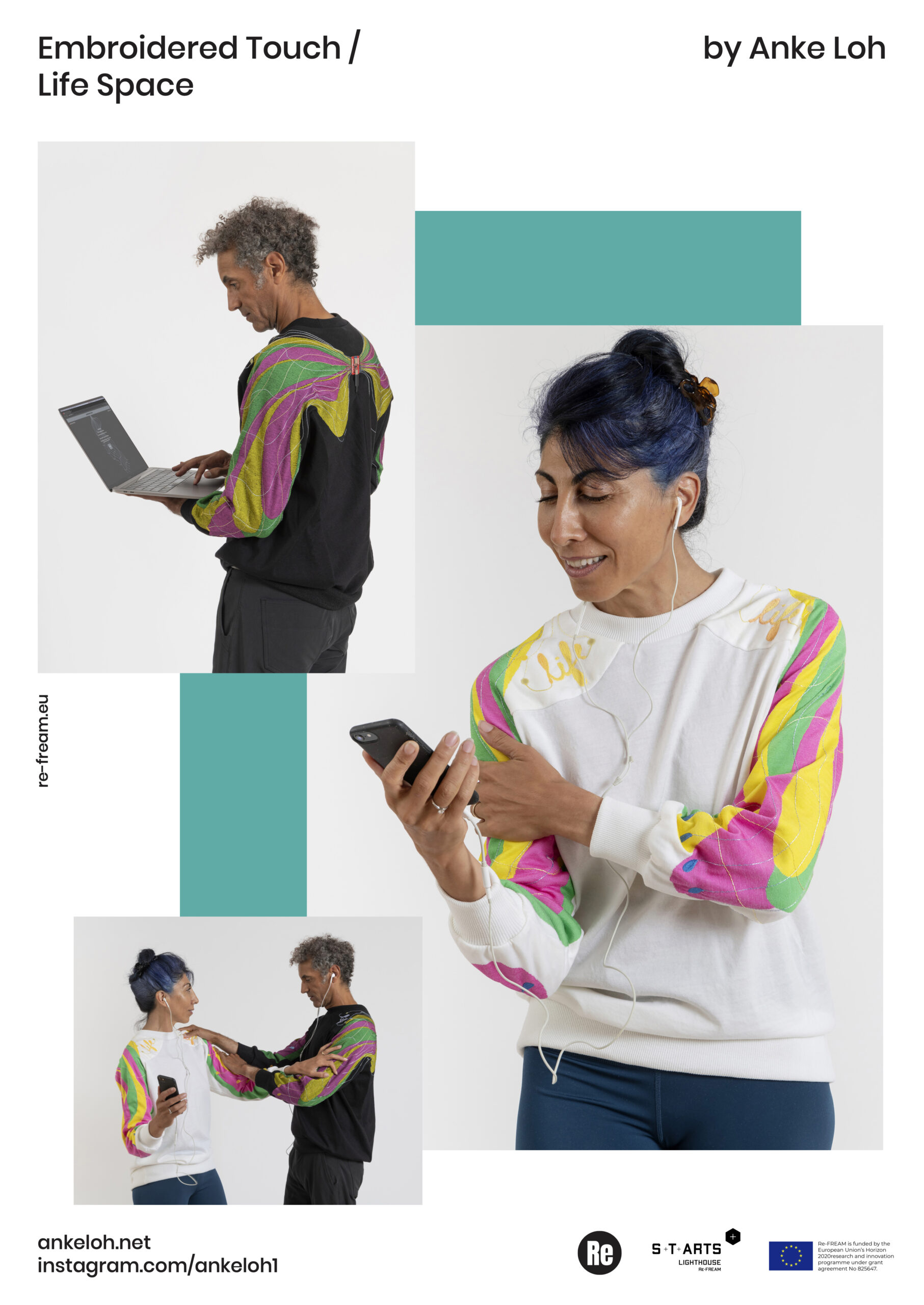 Anke Loh develops innovative upgrades to smart textiles by integrating the next generation of sensory embroidered technology to empower people in their personal space.

The goal is to reconnect individuals to the physical world through tactile craftsmanship with embedded technology (e.g. for fighting stress, anxiety etc.). Her research is not only focussing on the sensory textiles of apparel, but also its applications in chairs, cushions, mattresses, walls etc.

Anke Loh worked within the Smart Textile Hub of Re-FREAM in collaboration with the Re-FREAM partners  Fraunhofer IZM,  as well as Wear It Berlin and the flat-knitting experts at Stoll in Reutlingen. Christine Shallenberg contributed software design, field and voice recordings

“Anke’s collaboration with Fraunhofer IZM is based on her extensive experience combining textile craftsmanship with new materials and technologies. The project continues her research on interactive clothing which reflects on current social challenges.

It integrates eco-design criteria and the implementation of industrial production technologies for soft and touch-sensitive textiles. The latter include developments in additive and sustainable processes, such as embroidering conductive structures on knitted substrates and bonding multi-I/O electronic modules with non-conductive adhesives.

With the IZM team, Loh first focused on testing touch-sensitive embroideries made from different types of embroidered conductors embedded into a variety of stretchable jerseys and knitted textiles.

The pattern had to accommodate the 70 cm x 70 cm maximum size of the embroidery frame to encompass the back panel and sleeve areas. Located on the back center between the shoulder blades, the customized circuit board includes touch and heat sensors, a Bluetooth connection, and a connection for a USB-C cable to an external power bank.

New software was developed to capture and calibrate the circuit board with the sound software. The electronic module is integrated into the embroidered conductor tracks using the E-Textile Bonding technology developed at the IZM. The modules are connected to the textile substrate with thermoplastic, a non-conductive adhesive, thus enabling electrical and mechanical contact in one step.

The new technology also provides contact with thermoplastic insulated embroidery yarns, without having to strip them off beforehand. The sweaters for children were made with the TexPCB technology developed at the IZM.

For this purpose, conductively coated knitted fabrics are laser cut into a conductor pattern and laminated into a thermoplastic matrix. The TexPCB was then laminated to the fabric and the electronic modules bonded. A TexPCB panel can have 24 touch-sensitive lines, but for the children’s sweaters, only four were used.

The signals are also transmitted via Bluetooth, enabling a reliable transmission of the input of sensory data into an output. A software was developed to capture and calibrate the input into sound and to transmit it. A laptop and Android-friendly website walks users through calibrating the touch connection. 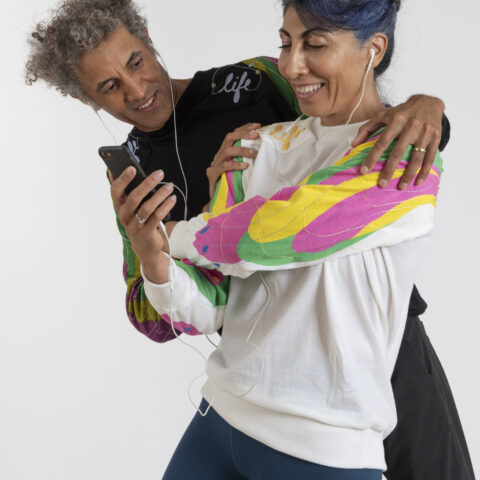 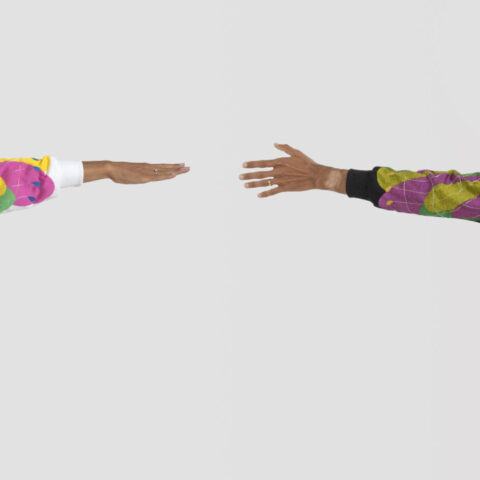 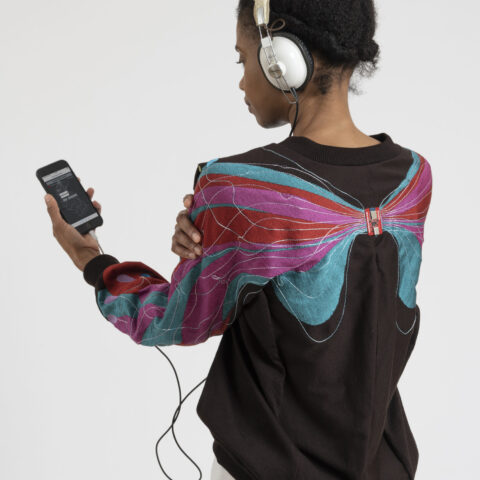 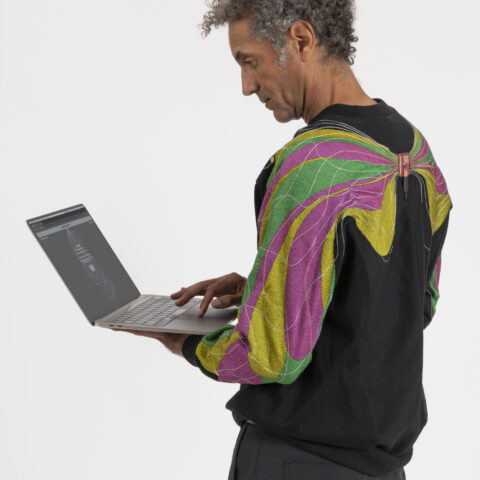 She studied fashion at the Royal Academy of Fine Arts in Antwerp, earning an MFA in 1999, after which she launched her former fashion design company, Rosso NV. Her collections have been featured in over two dozen international runway shows and exhibitions, including New York Fashion Week, The Centre Pompidou in Paris and Japan’s Osaka Collection Show. 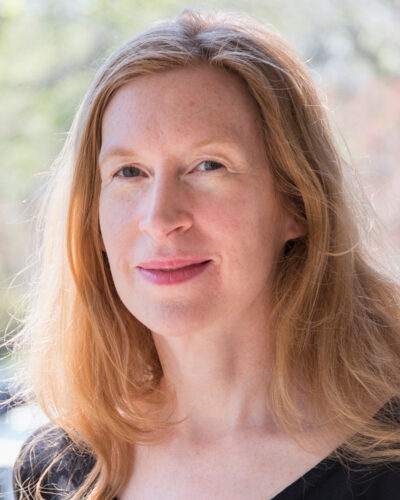 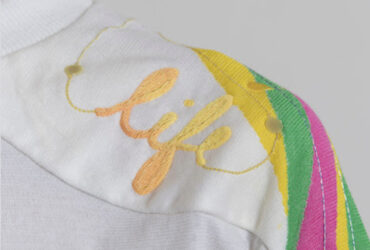 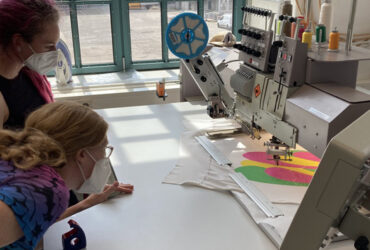 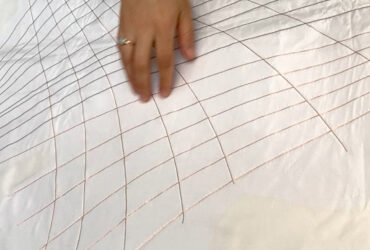 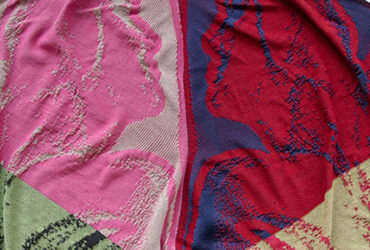 Sense of Play and Place 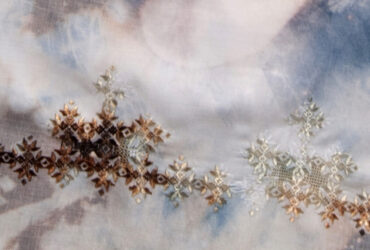 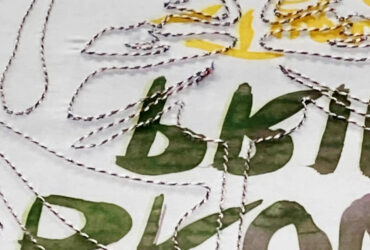