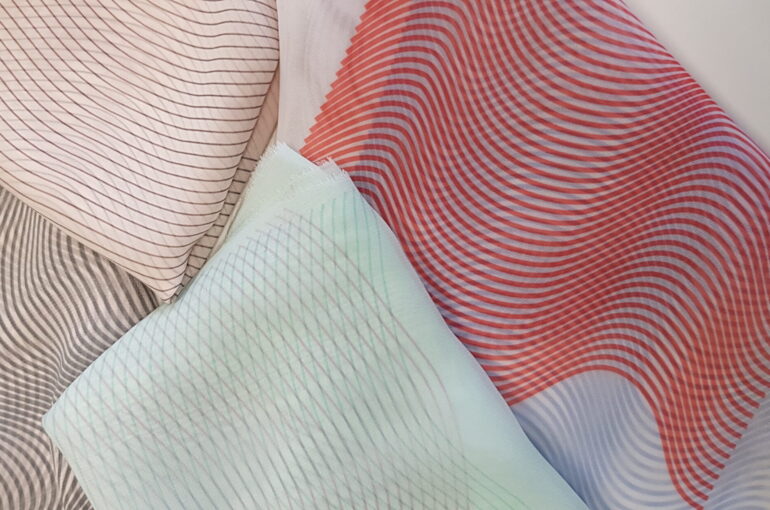 Over the past months, we did extensive research on activation methods and responsive reactive textiles usable for fashion integration. In this blog post, Christian Dils from IZM and I, Malou Beemer, will walk you through our process and findings.

The hunt for responsive and adaptive materials

To be able to change and adapt the appearance of a garment we started our research by envisioning and mapping out the possibilities. We came to the conclusion that there were different approaches we could explore:

It was important to get a feel of what is going on within the industry and what might be useful tools to create the changes mentioned above. What is the current state of the art and what is already available on the market?

Based on our field research we started to explore and test some actuation methods ourselves and in collaboration with external experts. Even though some of these outcomes are currently not usable yet, we would like to share this process.

Actuators are components that can accomplish the conversion of energy into mechanical form with the ability to move or control a mechanism or system. Actuators can reversibly contract, expand, or rotate in response to an external stimulus such as voltage, current, temperature, pressure, and much more. For several years, intensive research has been carried out on soft actuators with the aim of making the interface between people and machines softer and therefore safer in the event of a collision (aka Soft Robotics). In the field of fashion, there have so far only been very few applications with soft actuators. One of the aims of this co-creation is to research suitable soft actuator methods, materials and processes that can be integrated into clothing and enable reversible movement and control of the fabric.

Inspired by numerous soft actuator projects that are integrated into textile-based objects by international research teams, such as the MIT Tangible Media Group or Harvard BioDesign Lab, an intensive literature study was carried out. Over 50 scientific articles were studied and interviews with experts such as from the Fraunhofer ISC Smart Materials Centre, MIT and the RCA Soft System Research Group were carried out. As a result, four types of actuation methods were further investigated, namely electric field, ion-based, pneumatic and thermal actuation. An overview of the literature research is presented in Table 1.

At the same time, we defined the minimum specifications for the use of the soft actuator in fashion for our project. To ensure user’s safety and comfort, the actuators should not be operating above DC > 48 V or T > 50°C. Furthermore, no bulky components such as servo motors, pumps or valves should be used. Due to the fact that we couldn’t make or buy any of the novel soft polymer-based actuators from other research laboratories (companies don’t offer them yet and the technical team has no resources or know-how to manufacture them), the only concept we had left was to design and test thermally driven soft actuators.

Our concept is based on the bimetal strip and the use of two materials with a large difference in the coefficient of thermal expansion (CTE). When the material sandwich is heated, there is a mechanical shift due to the different length expansions. Instead of the typically used metal layers, we have selected an m-Aramid woven fabric (trade name Nomex) with a CTE of 1-3 as the base layer and firmly joint it with a 200 µm thick polyethene film (CTE of 150 – 200) by lamination. The material sandwich was then heated using an IR radiant heater from BBC Black Flash. The deformation of previously lasered, exposed structures was observed and the heat that hit the surface was measured using an IR thermal imaging camera. It was observed that actuation was triggered at about 60°C, but its optimum was between 80°C and 120°C.

Figure 1 shows the test setup and Figure 2 shows an image with high deformation at high temperature.

In the next step, we improved the design of the soft actuator structures and developed several TexPCBs that were laminated directly onto the material sandwich as a heating structure. One TexPCB consists of metallized nonwoven and the other of a metallized knit fabric. Figure 3 shows the individual materials and design variants before lamination and Figure 4 shows the final tested soft actuator samples.

The samples were then connected to a power source and the power introduced was successively increased to generate sufficient heat for the deformation. Unfortunately, no deformation was observed in any of the samples, although the temperature introduced by the TexPCB heating structures was measured up to 100°C. Since delamination of the PE film from the Nomex fabric as well as the development of steam and odour were observed, the experiments were discontinued after these tests.

Besides the soft activation research, we also did a study on how we could create big effects with a great impact by using small movements. We created patterns with the use of the principle of the Moiré effect. Using a sublimation printer allowed us to apply the patterns on semi-transparent chiffon fabric. This technique and way of application on the fabric works well. The effect itself is interesting to look at but at the same time not really inviting and can be even experienced as nauseating.

Besides, the question remains; what will activate and trigger the movement? To explore this further we collaborated with The Interactive Textile Library of Julia van Zilt on the following actuation tests.

We combined the Moiré effect with the use of electromagnets to activate the movement.  two sheets of fabric with a 3D printed structure moved on top of each other and therefore created the visual effect. This prototype works but as mentioned in the table above, the use of electromagnets has a lot of disadvantages. Besides that, the textile needs to be fixed in a frame which is not really inviting to place on a human body.

Even though we focus on evening and party wear, it is important that the garment itself is not approached as a costume but from a wearable fashion perspective.

We want to avoid the gimmick and gadget feeling. Also, the pixel LED effect is not an aesthetic direction we want to explore because this is something that has been seen and done before.

Therefore we explored two different directions; the use of a 3D reflective structure and an approach that is based on layering different textiles with different properties.

The quick and dirty prototype of the 3D reflective structure works and creates an interesting effect. It is however pretty passive, only the change in LED colours and patterns affects the visual effect.

The layering approach has more potential due to its adaptiveness. The construction is as followed; a base layer where the LED grid is integrated, a layer to diffuse the light source, 1 or 2 transparent mask layers with a 3D printed pattern and a top layer. This approach is really suited for modular design because the mask layer, as well as the top layer, could be separately interchangeable. Also, the programmable LEDs can create different patterns, colours, intensity and can make the pattern appear or disappear depending on the light actuation. Which makes the garment extremely adaptive.

As you have read above, there are a lot of different approaches and directions. We believe that soft actuators have a big potential for future integration. It is, however, currently not at a usable level and needs extensive further research.  Therefore, due to the restrictions that are insurmountable when designing garments in regards to wearability, comfort and safety, there was no outstanding working actuation method that convinced us to do a deep dive. This is why we decided to continue with a broader exploration of different possibilities and techniques that have the potential for future fashion integration.